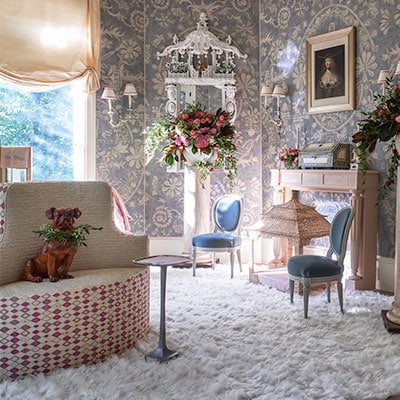 This year’s Kips Bay Decorator Show House in Dallas, the third such event, took place in an Old Preston Hollow estate: a meticulously groomed abode sprawling over 12.470 feet. Twenty-four designers were chosen to transform the interior, and the results give a sense of current interior trends, design personalities and the 2022/2023 zeitgeist.

The modern minimalist aesthetic is nowhere to be found. The rooms burst with bold, playful prints, with layer upon layer of colour and texture. The pattern explosion helped to soften the dauntingly high ceilings and voluminous rooms, imbuing the interior with warmth. Wallpaper is clearly making a huge comeback, along with layers of pattern. Purple was also having a moment.

A key concept throughout the show was the idea that luxury does not have to be at the expense of comfort. Instead, designers leaned into high-end textiles and custom-made furniture and art. Schooler, Kellogg & Co. Interiors looked to the 18th century for inspiration, using a custom hand-blocked linen for the walls of the firm’s feminine dressing room and closet, alongside an embroidered sofa, velvet-upholstered antiques and an inviting sheepskin rug by Stark Carpet.

With a monochromatic palette, Alessandra Branca used pattern expertly, drawing on the meadow and live oak trees seen from the Living Room window for inspiration. Furniture from the 1940s–1970s is mixed in with green tartan, tweeds and ticking stripes from the Blanca textile collection. The verdant theme is underscored by the vine-patterned Foglia wallpaper (also the designer’s own brand) and the oversized indoor plants. Stepping outside, it was clear that Isabel Ladd had no interest in blending in with the foliage. Instead, she created a tropical paradise on her south terrace using weatherproof upholstery and cushions by Serena and Lily and a blue/ivory outdoor rug by Loloi.

This year’s Kip’s Bay Decorator Show House was open for in-person viewing for just four days at the end of September, but a 3-D video tour is still available on the Kips Bay website.

Read the rest of the article in COVER 69. Subscribe to COVER magazine here.