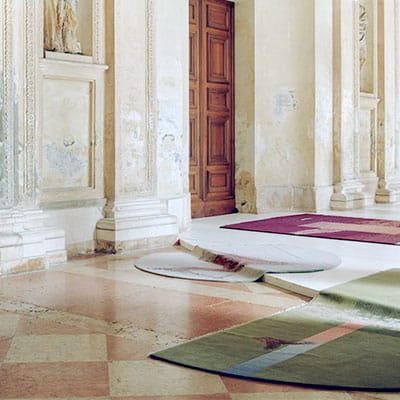 During Milan Design Week in June, Nodus exhibited a selection of collaborative rugs including designs by Scattered Disc Objects, a design studio which was founded by Bahar Pourmoghadam and Marco Cattivelli in Piacenza, Italy in 2020. The message behind the three Impassable rug designs is one pertinent to the world today, a comment on migration and national borders. Here Bahar Pourmoghadam discusses the designs with COVER magazine.

What are the three Impassable rug designs expressing?

The collection focuses on the contradictions that regulate the movement of people beyond national borders: here carpets are both a metaphor for and a proof of the limitations. The collection consists of three rugs of different shapes and sizes, hand-knotted in wool and silk thread. They are rugs inspired by the vastness of the desert and all the endless landscapes, where—perhaps—it is more difficult to imagine a border, a barrier.

Why did you choose to express this idea through a rug design?

A high-quality carpet is the result of long manual work, and its value is often directly proportional to the meticulous work required to create it. The intricate lines of the designs represent the complexity of graphics on official documents like passports and here they are placed alongside the gabbeh motifs of the Persian nomadic tradition.

Carpets fly, but those who make them don’t. Rugs are deeply connected with migration, as a tool of nomadic life and as precious goods on an international market, where transportation is easy and craftsmanship is in demand. The production of these precious artefacts is almost always carried out by those peoples who have greater difficulty in crossing national borders.

The studio considers the cultural significance of carpet, and questions the possibility of expressing through rugs the contradictions that regulate the movement of people beyond national borders. Impassable imagines a language for the desire of freedom, comparing nomadism with the physical and virtual barriers of contemporary society.

Why did you want to express this idea of freedom and migration?

I should say the notion of border takes on a different value depending on one’s citizenship. As an Iranian citizen, I have experienced firsthand the difficulty of moving between different nations. This seemed to us a perfect topic for a collection of rugs, for several reasons but above all because the carpet is historically a tool for nomadic life, designed to be easily transportable and resistant. Rugs very often represent the desires of the people who knot them. It is not surprising that traditional Persian carpets depicted exquisite gardens: oases of luxuriant vegetation are the ultimate wealth in regions where water transport is a fundamental problem.