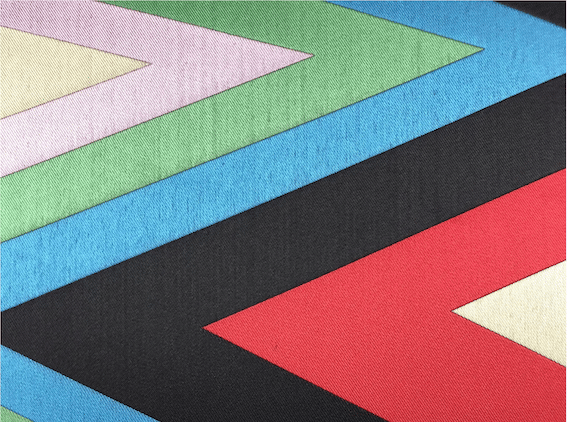 From 1 October 2022 until 8 January 2023, all four gallery spaces of Touchstones Rochdale will be taken over by Mischief, an exhibition featuring new textile art and selected pieces from the archives of New York-based queer feminist artist and designer Liz Collins.

Mischief showcases the breadth of Collins’ work, weaving threads throughout her career to date. The exhibition will also demonstrate ties to industrial making methods, from traditional and low-tech to modern hi-tech approaches, with links to Rochdale’s own historic textile industry. The show is guest curated by art historian and curator Julia Bryan-Wilson.

COVER fell in love with Collins’ work back in 2015 and she featured in issue 41 of COVER (Winter 2015). Here is an extract of the article.

American artist and designer Liz Collins speaks the language of textiles with a loud voice. Her exuberant work has included installations, performances, knitted couture, knitted art, two fabrics designed for Pollack Interiors, rugs and just about any form of art that can be made with yarn. It has been shown in a multitude of spaces and places from the United States to Croatia.

Direction is clearly a driving force behind Collins, whether it be her visual use of the language of signs in her artwork, the directing of her knit performance or the very direct and open way she expresses her ideas aesthetically and in conversation. Her work also concerns the process of creating space on a grand scale and strong colour and contrast. Collins emulates the attention grabbing qualities of the signs that guide us through public spaces and makes work that cannot be ignored, full of what she describes as ‘energy, life force and aggression’.

It was at Rhode Island School of Design that Collins received her BFA and MFA in textiles and where she got into structure and knitting. This took her into fashion knitting, where she explored the concepts of, as she describes, ‘tension, tethering and bondage’ – ideas that can be seen repeated in much of her textile art. She had her own fashion line from 1999-2004 and only recently stopped producing couture knitwear for high end fashion brands. Co-existing with her knitwear persona, there has been a whole other textile life, a wealth of work which belongs to all categories of art, craft and design. The common language is yarn and she states: ‘I use yarn to have a relationship with space’.

The shape and design for the striking Puzzle, in strong blues, pink and red, is taken from a needlepoint by Collins, which was stitched in reds and yellows. Hand-knotted in New Zealand wool and Chinese silk, the dynamic Zagreb Mountain design—a wild composition depicting a mountain and sky of chevrons—first began as a drawing by Collins. Closely related is the Zagreb Mountain Runner, the design of which she had previously exhibited as a silk scroll. Both show off Collins’ typically bold colour palette, which often features reds and pinks and is always eye-catching.

The rugs will be part of the forthcoming exhibition. Don’t miss Mischief at Touchstones Rochdale, on until 8 January 2023.