A postcard from Sardinia: Food, fables and fabrics

On a six-day tour of Sardinia organised by the Memory Wefts project, Lucy Upward explores traditional local weaving techniques and textile customs and gets a real sense of the Mediterranean island past and present 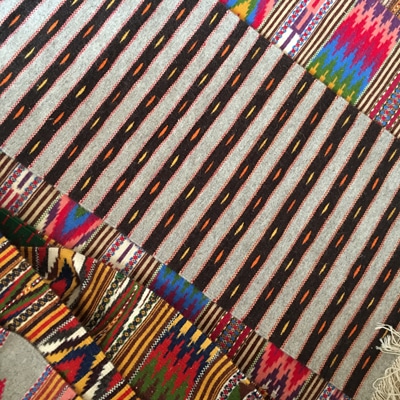 On a six-day tour of Sardinia organised by the Memory Wefts project, Lucy Upward explores traditional local weaving techniques and textile customs and gets a real sense of the Mediterranean island past and present. 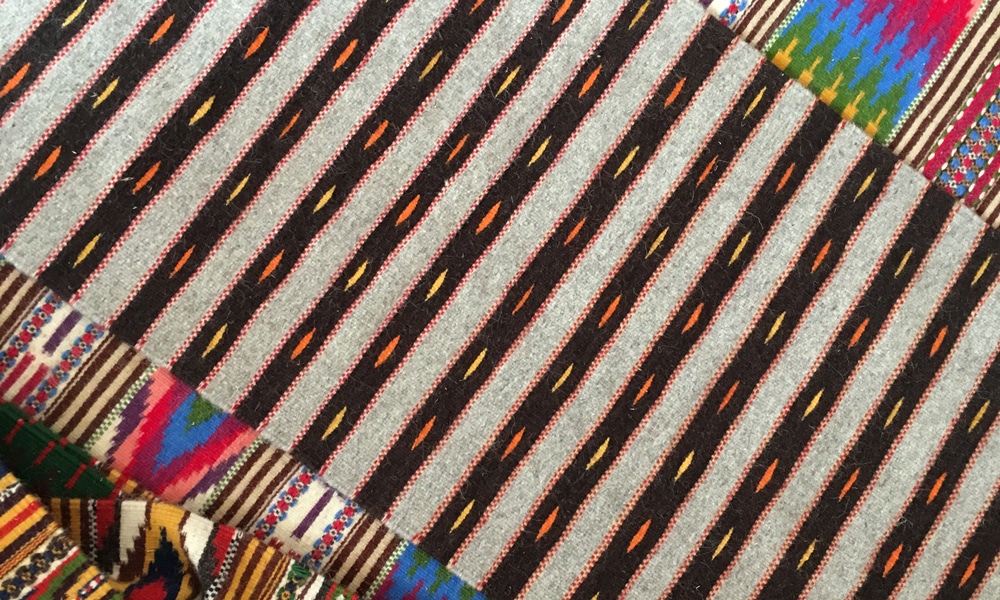 Weavings by Giovanna Chessa at her home/showroom in Nule

The objective of the Sardinian textile tour organised by the partnership of the Memory Wefts project this August was to promote Sardinian weaving to an international audience. My fellow travellers in the six-day mini-bus adventure were four rug retailers (sellers of antique and contemporary carpets), three tour organisers and our driver Stefano. Never having travelled to Sardinia before I assumed it would be similar to my nearest point of reference, mainland Italy, but I was soon to find out this was entirely wrong, and not an opinion to be voiced on the island. Our first evening of wandering round an ancient Nuragic ruin at Cuccurada in the pitch black and sharing dinner of a spit-roasted pig with the friendly project organisers set the tone of the tour perfectly. Our singer for the evening gave us the lowdown on the local culture in ten songs sung with great gusto and comedic effect in the Sardinian language, making it quite clear that this was most definitely not Italy. 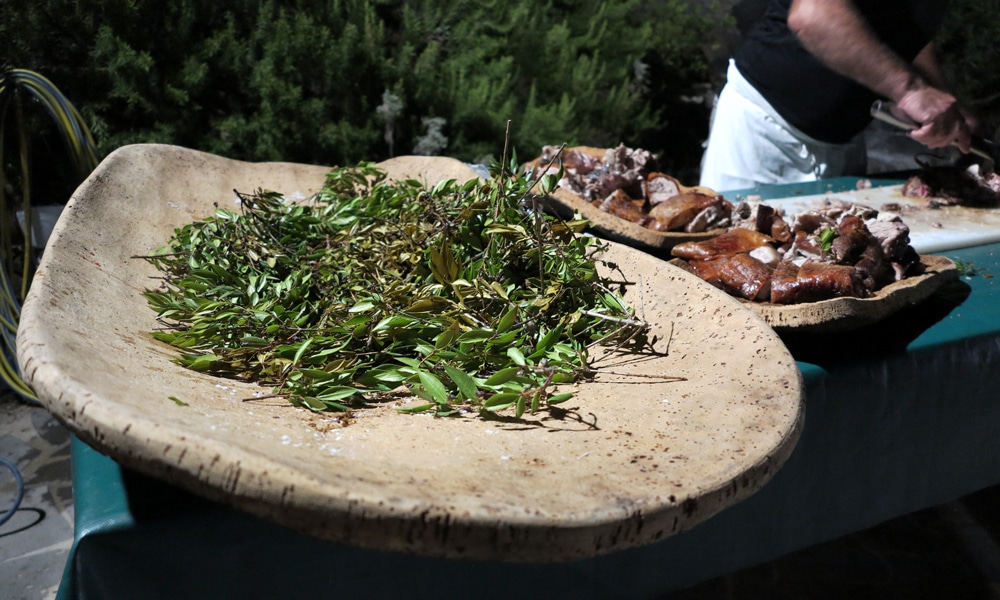 The first day began with masks. It may seem a strange way to start a textile tour but once we had seen and appreciated the importance of these carnival masks on local culture, we felt one step closer to understanding this mysterious island. The 65-year-old mask maker, Ruggero Mameli, founded his well-known studio in Mamoiada fifty years ago, when he decided to start making masks professionally. Most interesting was his collection of masks made from various woods, all mimicked his own strong features. 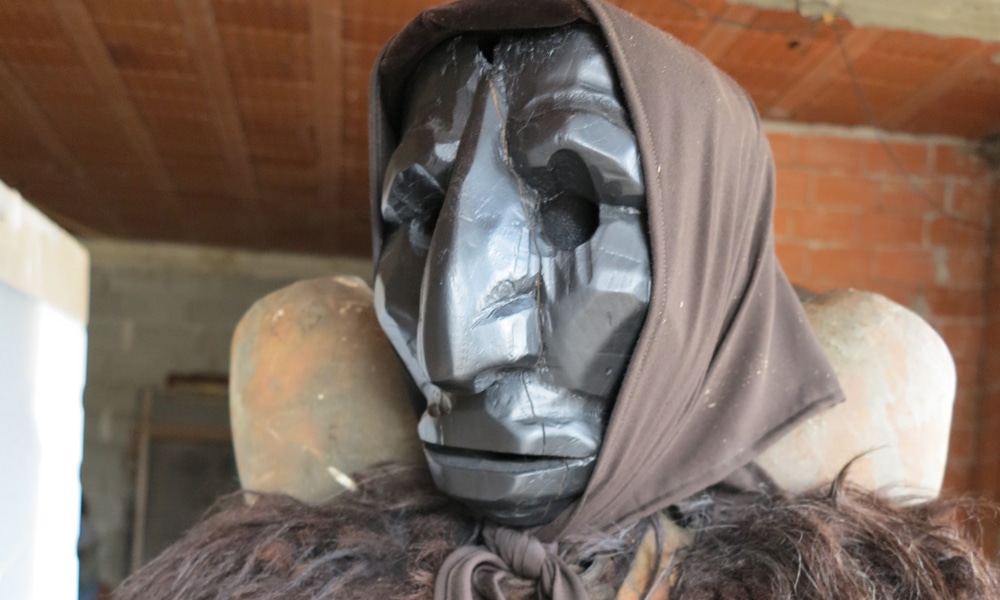 At the Museum of Mediterranean Masks nearby we learned about Sardinia’s carnival, which occurs on 17 January and was once a pagan ritual but is now marked by the feast of St Anthony. The costumes vary from town to town but in Mamoiada, local men dress up as mamuthones with black masks, black sheepskins and 30kg of bells strapped to their backs. They are guided by the isso hadores (white masks) who drive out bad feeling and bring positivity to the community. It was during this visit that we got a true sense of Sardinia’s pagan past that has somehow remained very much alive despite Christian intervention. 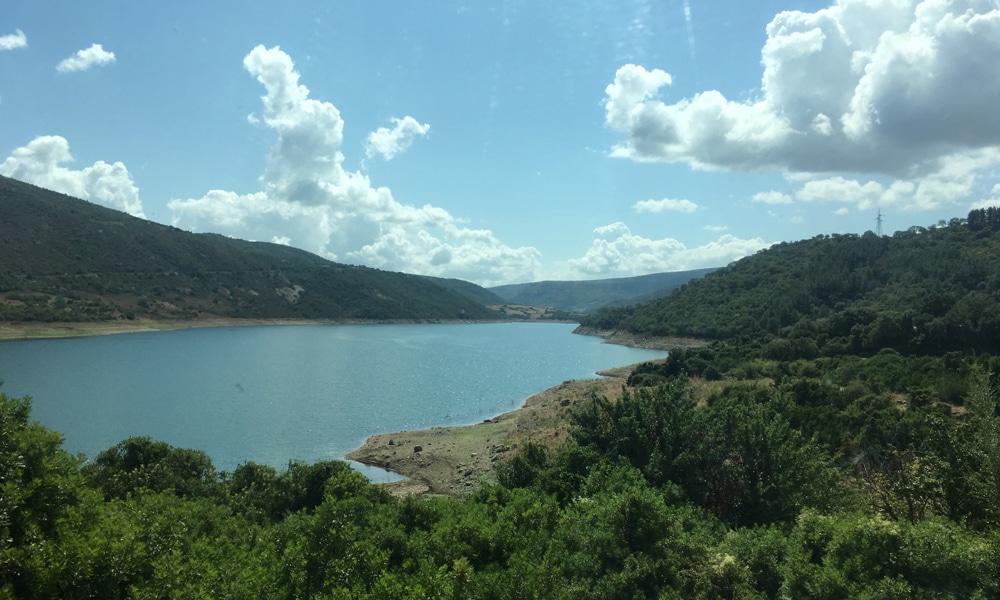 View from the tour bus

On to textiles, our visit to the studio of octogenarian Speranza Ladu, who started weaving at the age of twelve, introduced us to the public enterprise of the Sardinian Institute for the Organisation of Crafts (I.S.O.L.A.), which was set up in the 1950s by artist Eugenio Tavolara and which revitalised local basketmaking and weaving—including Ladu’s Sarule studio. Now the location is more of a demonstration site but in the darkness of a storm-induced power cut we found a lovely antique sa burra textile, the motifs of which depict objects from the daily life of the Sarulese community. 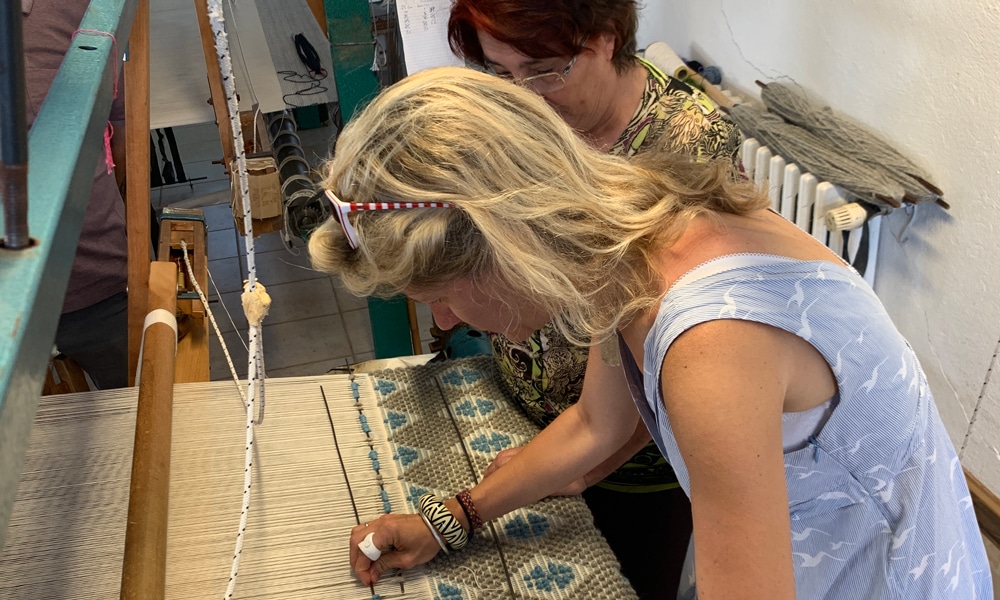 The Su Troba sciu cooperative of weavers in Mogoro was set up in 1978 after ISOLA closed. As all local women traditonally would have, the seven weavers formally worked on smaller looms at home but in the studio they now create larger works and get patterns from designers to update their products. All work is handloomed using wool from local sheep, which in the main is machine-spun (only one company in Sardinia still hand-spins local wool) and predominantly chemically dyed. We watch various products being made including a bagas or tapestry weaving, and we got to try the local ‘pibiones’ (meaning grapes) technique of weaving, where a pattern is made by raised loops in the design. 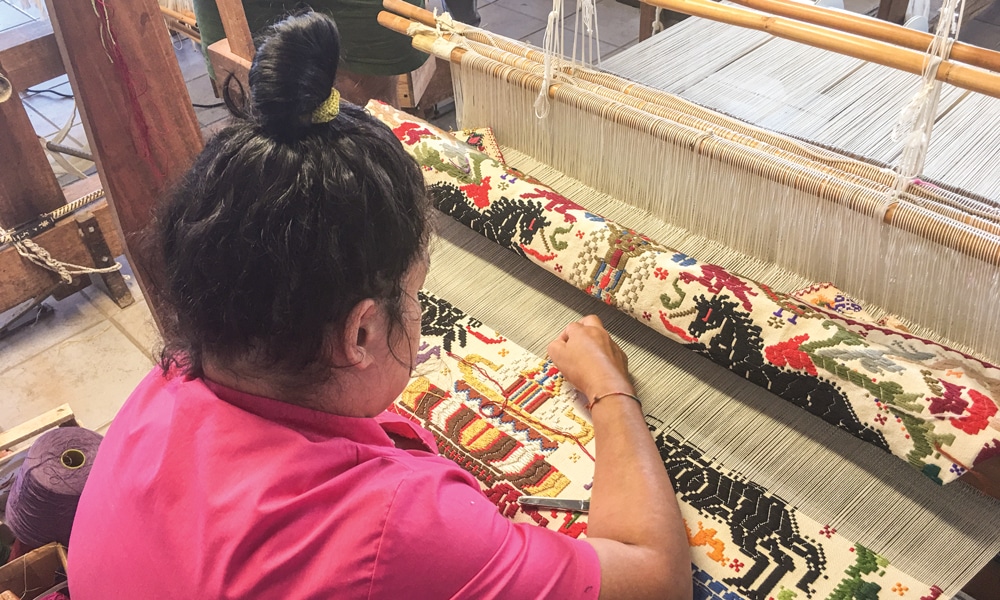 While I have not mentioned eating in a while, I feel I should, for food was as an important a part of this tour as textiles and to say we ate well would be doing the many chefs on the island a disservice. Each day was punctuated by two three-hour feasts, and if the strict schedule went to pot because of food, so be it. Food and drinking ruled the day and one particular highlight (how to choose?) was at Agriturismo Cuscusa in Gonnostramatza, where the ravioli with lemon and ricotta and the 48-hour cooked pig was washed down with organic wine and the local digestive Mirto. We ate like kings and went home needing a new wardrobe. 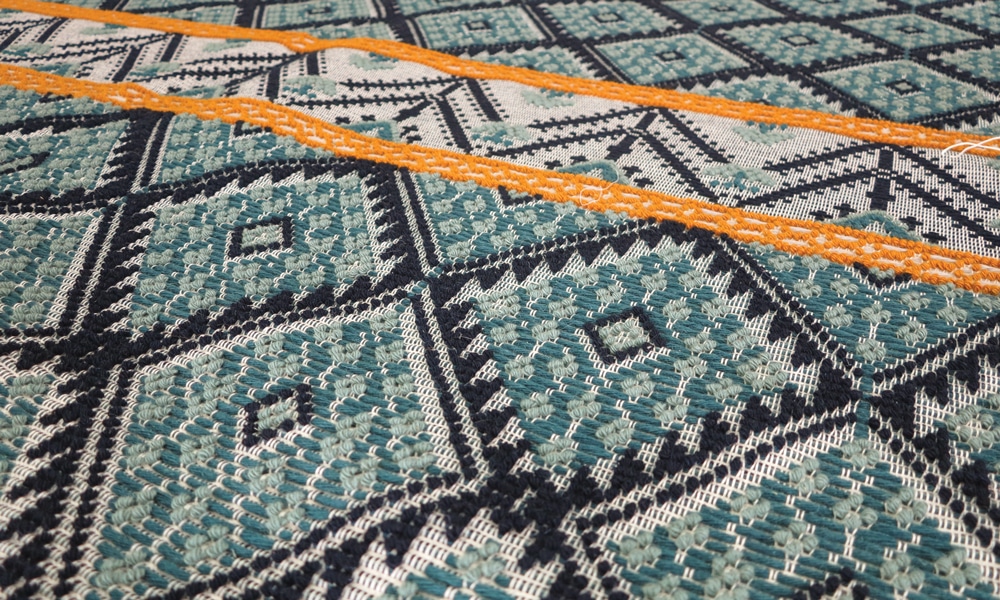 On day four we headed to the small town of Samugheo, in central Sardinia, known as the island’s ‘capital’ of textile craft. As an area dedicated to textile arts, one of the most eye-catching things you notice as you enter are the murals painted on the houses depicting the locally-designed rugs. Here you can visit the thirteen remaining weaving studios such as the tiny but inspiring Laboratorio Tessile Artigiano Isabella Frongia—where we fell in love with many textile pieces—and further out, Mariantonia Urru, whose internationally recognised output combines manual weaving methods—many dynamic ‘pibiones’ designs—with high-tech jacquard machines. 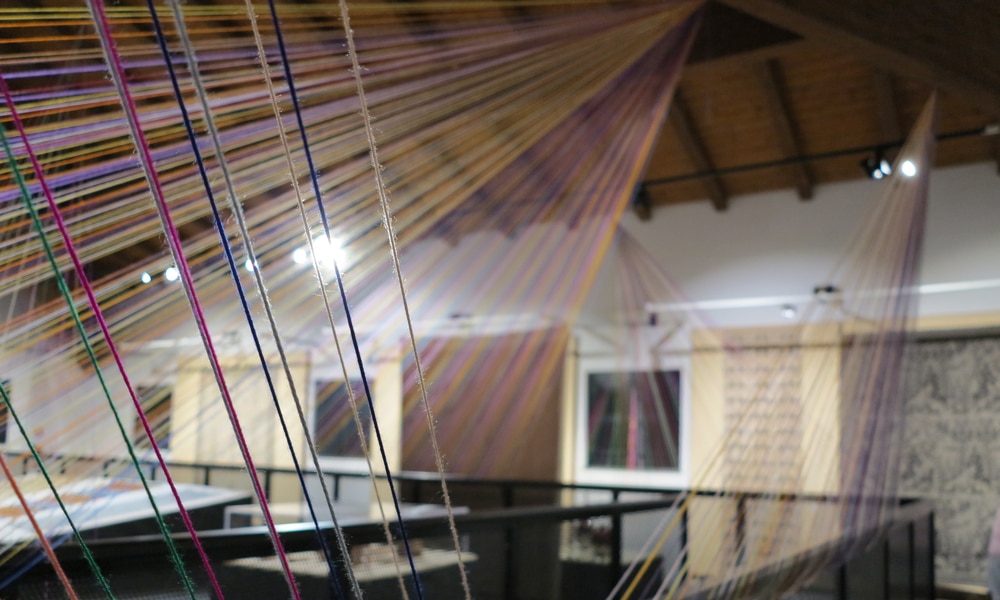 North of the town is the impressive Museo Unico Regionale dell’Arte Tessile Sarda (Regional Museum of Sardinian Textile Art) or MURATS Museum, which over two floors manages to comprehensively demonstrate the breadth and beauty of Sardinian weaving. Founded in 2002, to preserve and document handmade textile art from Sardinia, the museum programme features temporary exhibitions as well as displays of its extensive permanent collection. When I visited, I got to see the impressive exhibition ‘NARAMI: Antologica del tappeto Sardo’, showing the work of forty different textile production centres of the island using over seventy artefacts from the ex-ISOLA Collection. 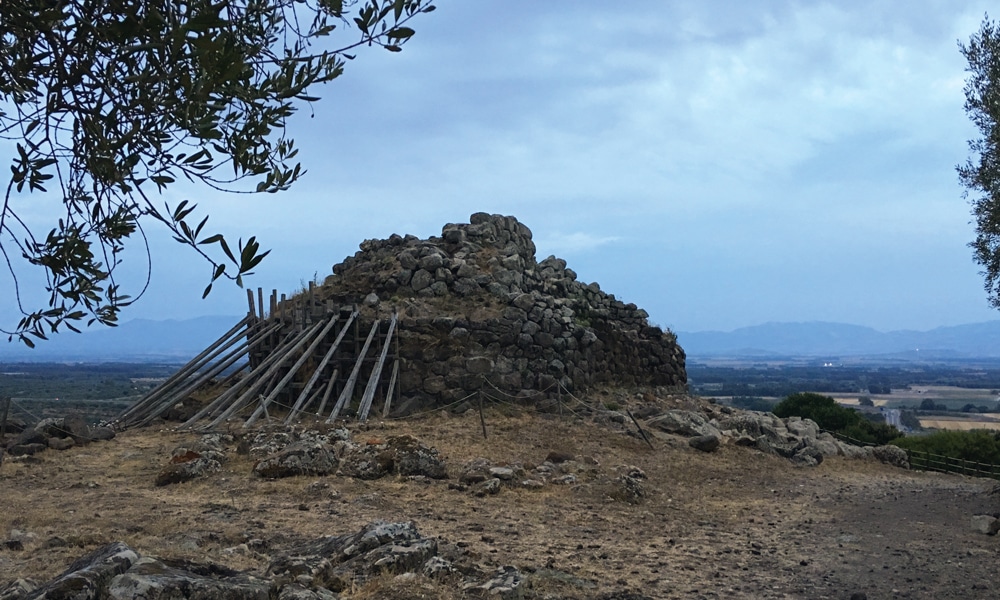 The ancient Nuragic ruin at Cuccurada

While the MURATS Museum collections date from the 18th to the 20th century, the first room of the exhibition was home to designs from the 1980s/1990s, designed by well-known Sardinia-born artists such as Mauro Manca, Constantino Nivola and Maria Lai, whose beautiful museum in Ulassai we also visited. Room two showed the diversity of visual languages used throughout the island in a group of 20th-century textiles, from white on white ‘pibiones’ designs to intricate geometric weaves. 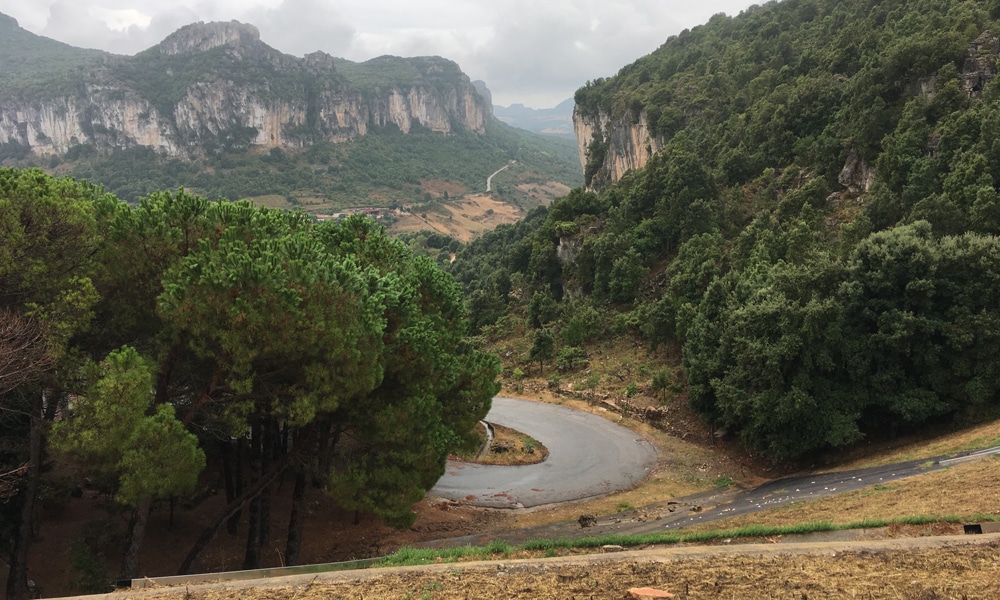 View from the tour bus

Further highlights in the upstairs gallery were the tapinu e’ mortu (funeral carpets) with striking designs and interesting if rather macabre histories, dating from the late 18th to early 19th century. Used to hold the body of the dead during a wake, these kilim designs were kept in the same families for many years. Twelve are known to be in existence in Sardinia, all coming from the hill town of Orgosolo, with five belonging to MURATS. 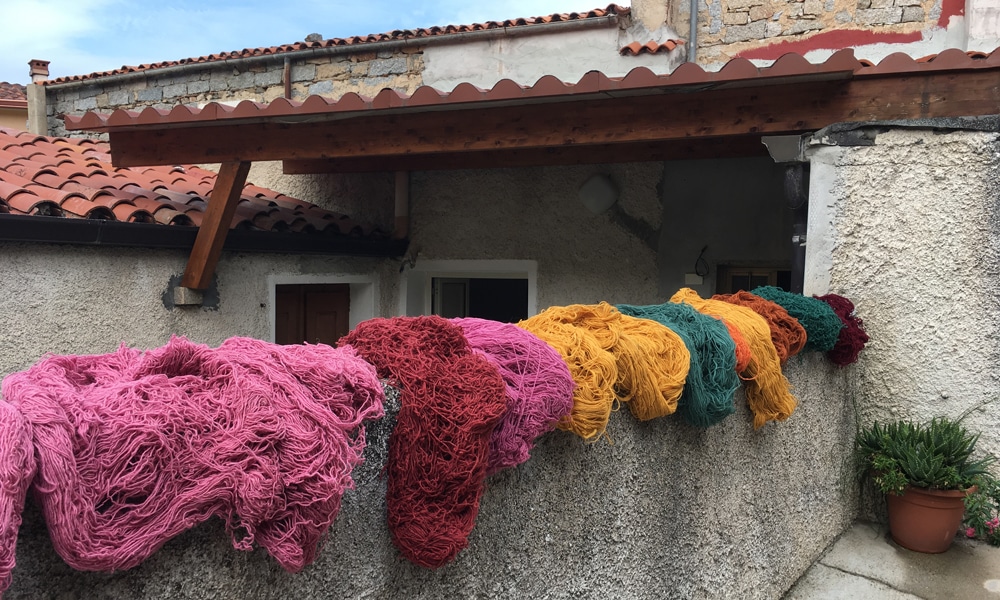 Day five featured perhaps our most treasured visit. A two-hour bus ride to the town of Nule, in former bandit territory, took us to the home/studio/showroom space of respected artist Giovanna Chessa. A weaver since the age of nine, Chessa dyes her own wool and has made traditionally patterned rugs for almost sixty years. An old weaving with natural dyes made by her grandmother adorns the living space in which we viewed her rug collection. Leaving her home two hours later than scheduled, we were overloaded with not only rugs but also the delicious cheese she makes. 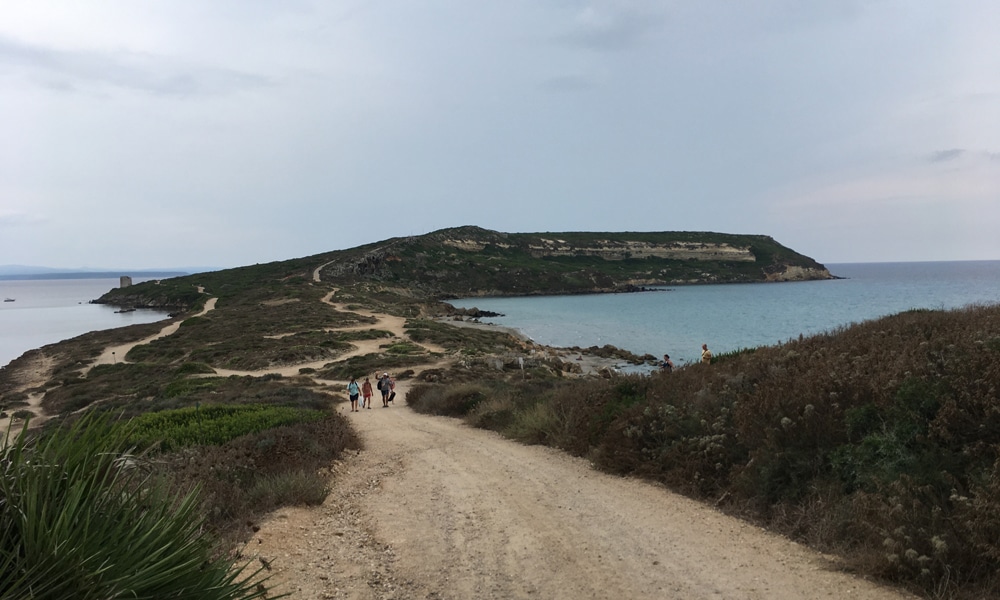 Alongside our immersion into Sardinia’s rich textile heritage, the tour offered visits to ancient sites that gave greater context to the island’s creative story. The three-thousand-year-old sacred well of Santa Cristina in Paulilatino had a magical air and staggeringly complex construction that reflected the lunar calendar. Our guided tour of the ancient site of Tharros, on the west coast of the island, was another highlight. This former Nuragic settlement was built on by the Phoenicians in the 8th century BCE and then taken over by the Punics followed by the Romans. The impressive remains—of which only one-third has been fully excavated—include one of only five Carthaginian temples in the world. 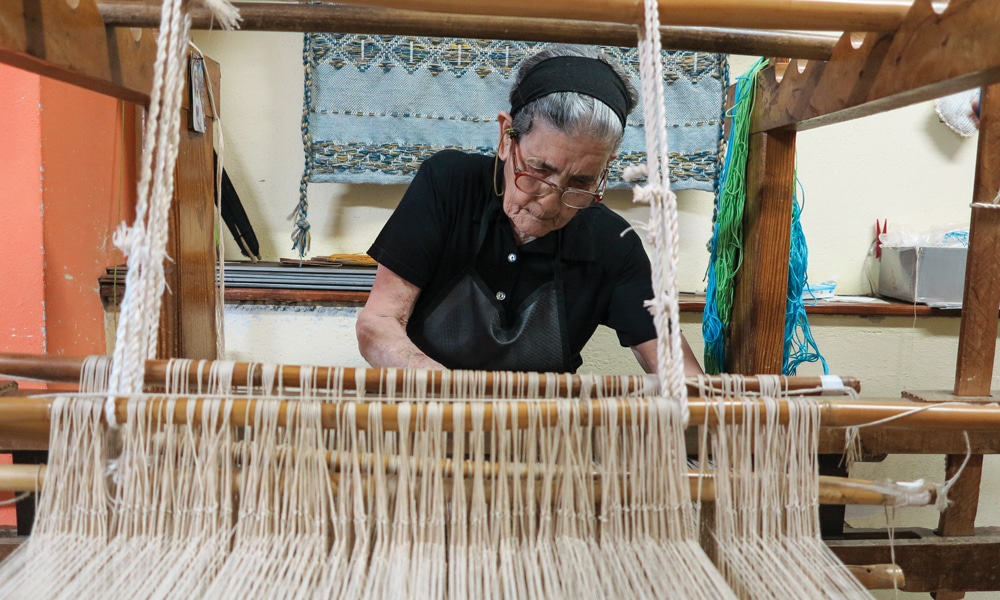 Our final day began with a basket-weaving exhibition with demonstrations, in a traditional house in the town of Sinnai, followed by a visit to the last day of the 58th annual Sardinian Artisan Fair in Mogoro, which over the previous month had seen an astounding ten thousand visitors pass through its doors. An exhibition of saddlebags and antique tapestries, kindly lent by the families of Mogoro and the Parish of San Bernardino, was a visual treat. The different designs and motifs woven in the a bagas technique denote from which village each textile comes.

After an exhausting but exhilarating six days the final hour was spent watching a compelling theatre performance produced by Teatro Tragodi, Effimero Meraviglioso and Gigi Spano. The play Istós, based on a short story by Salvatore Cambos, was a tale about the origins of weaving and was a deep, reflective way to end our unforgettable Sardinian experience.

Thanks to the organisers for a wonderful journey into this fascinating, unspoiled place.