The Best from Fuorisalone Milan 2015

As with every year Milan Design Week 2015 (14-19 April) was brimming with inspiring design. Here we highlight some of the best rugs and textiles on show across the various events and locations, travelling to Milan so you did not have to! 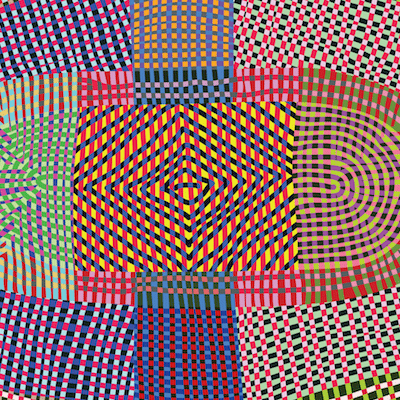 As with every year Milan Design Week 2015 (14-19 April) was brimming with inspiring design. Events covered the city and beyond making it an exhausting prospect to see even half of what is on offer. Here we highlight some of the best rugs and textiles on show across the various events and locations, travelling to Milan so you did not have to! 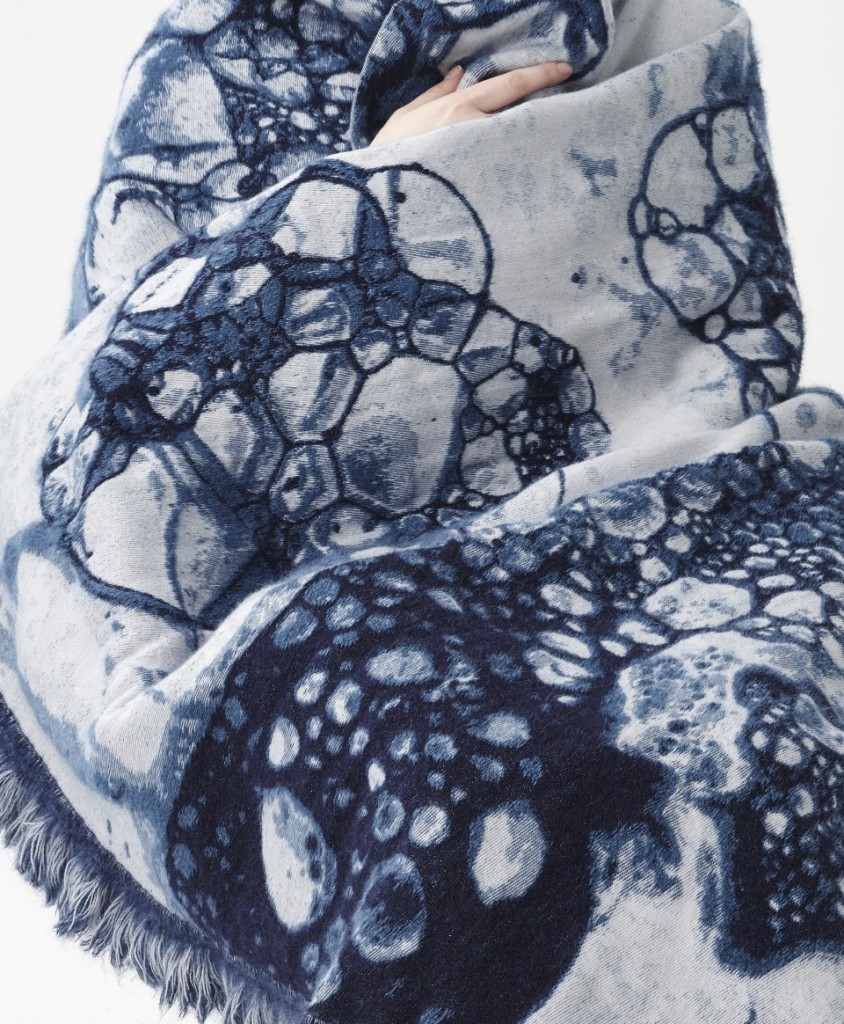 Bubblewrap blanket, Studio Sybrandy, showing at Ventura Lambrate. The brand’s homeware textiles depict bubble wrap, soap bubbles and the iridescent sky. This gorgeous blanket is made of wool, mohair and cotton and is meant to envelope you and make you feel like you are in a bubble. Find out more in the next issue of COVER, out in June 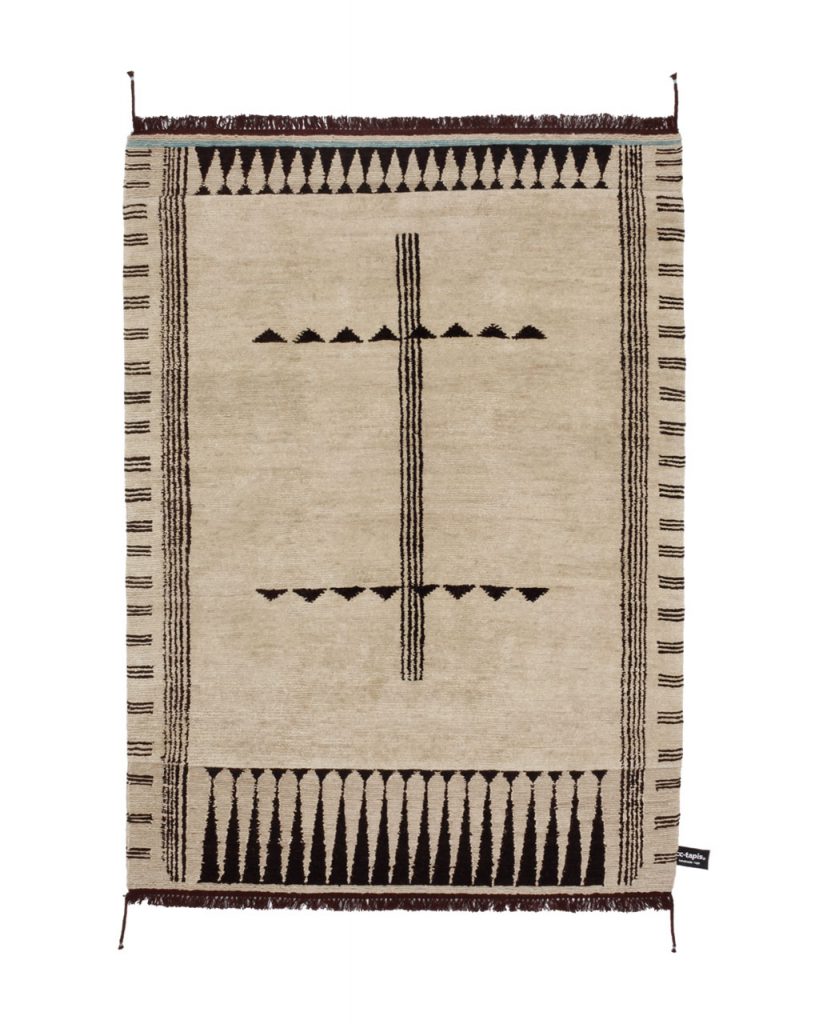 Primitive Weave 1, cc-tapis, showing at the company’s gallery on Via San Simpliciano. Among a host of new work, the brand showed two fantastic new designs that were influenced by Moroccan Berber rugs, with big knots and chunky wool 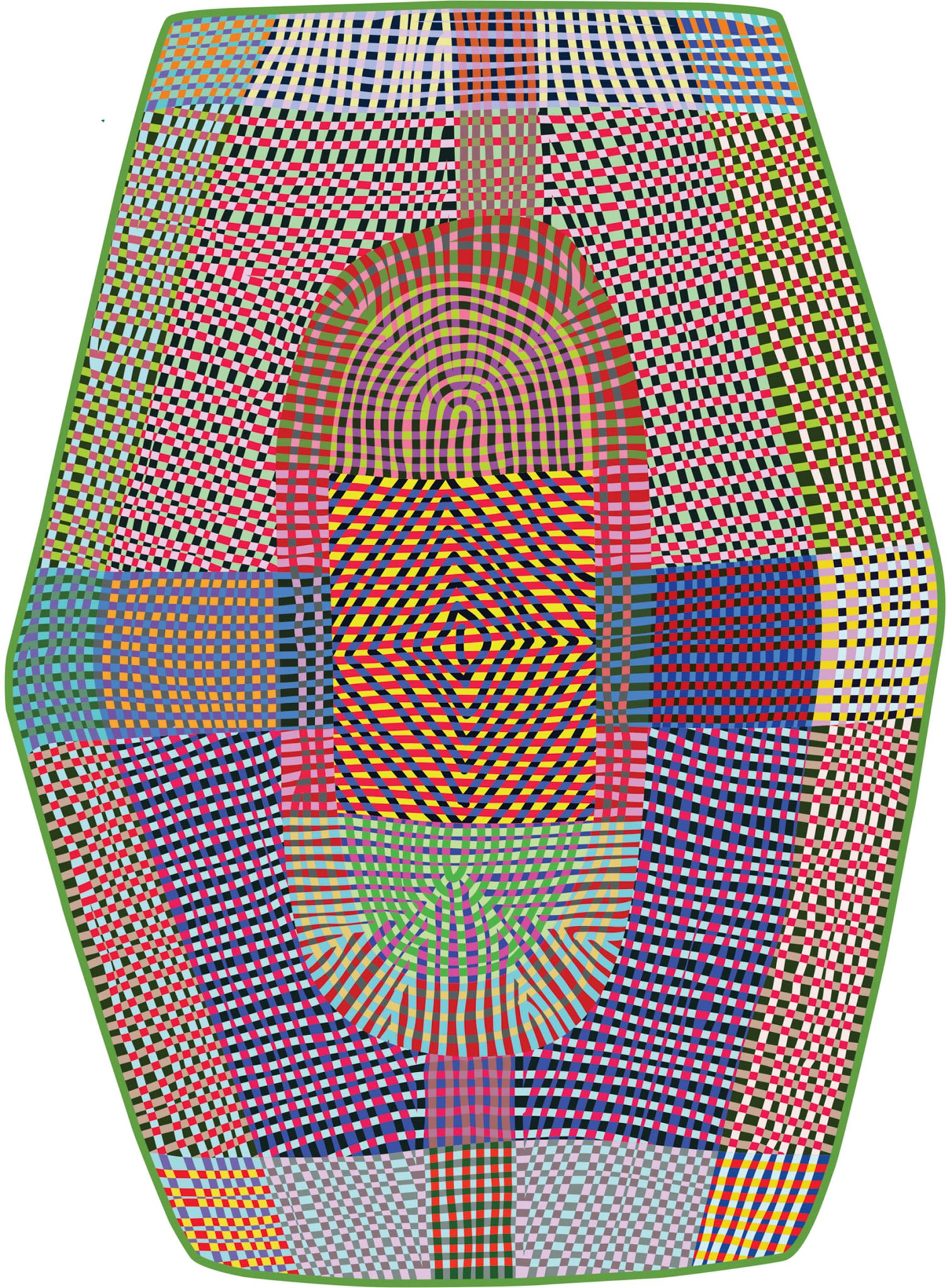 Freaky printed rug, Bertjan Pot for Moooi in Tortona. Moooi’s new printed rug collection was displayed in a grand exhibition on Via Savona. Designed by the likes of Marcel Wanders, Studio Job and Front, the creations are visually very strong event though they are only printed on an acrylic base 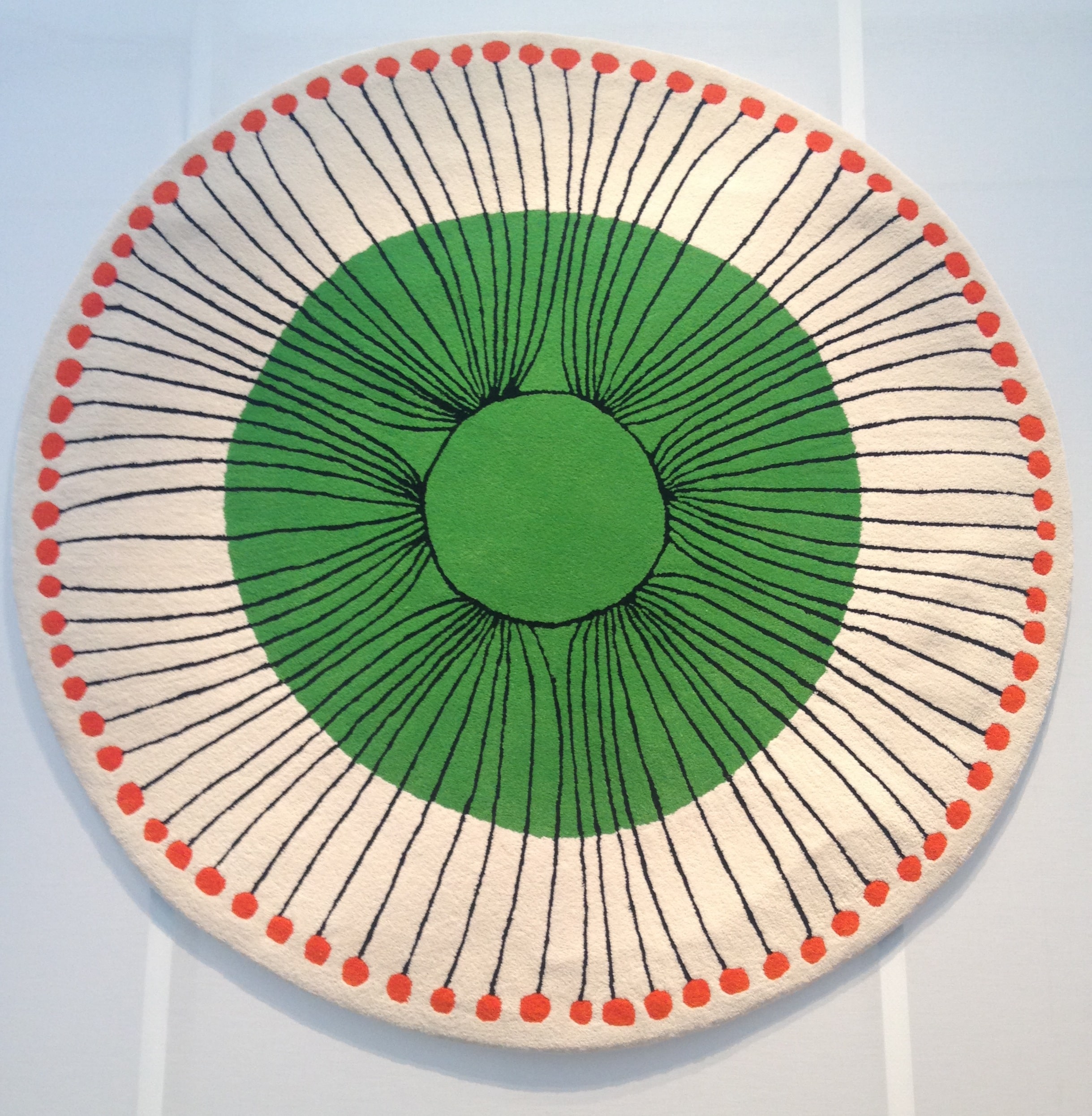 Lime Sun rug by Andrew Ludick for Ceadogán Rugs in Tortona. A display of Irish design featured two eye-catching rugs by Ceadogan plus textiles by Mourne 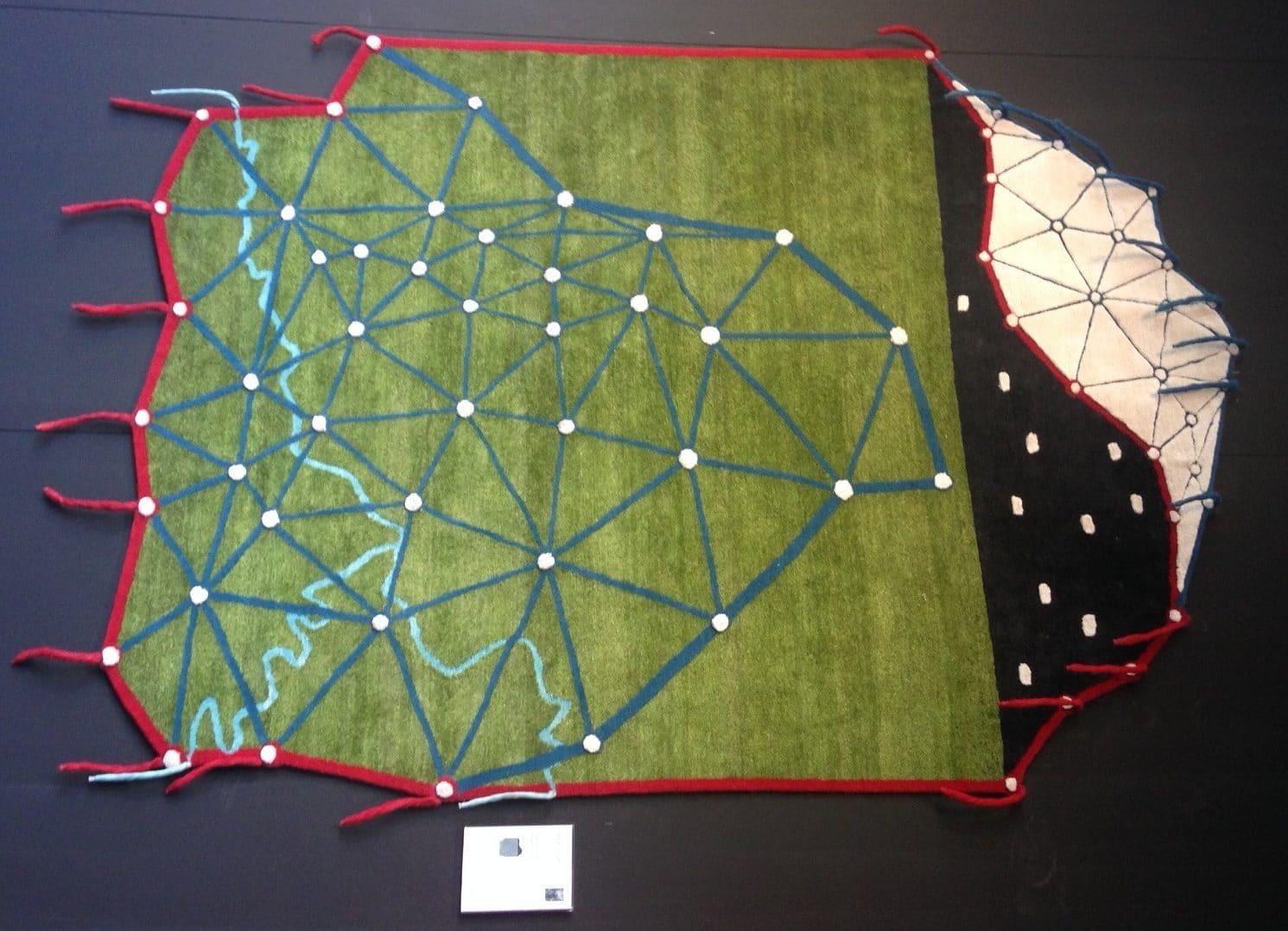 Topographie Imaginaire rug by Matali Crasset for Nodus. An interesting carpet design made of wool, bamboo silk, linen and hemp. The Nodus display for 2015 at the cloisters on Via Cavalieri del Santo Sepolcro featured over 10 striking new designs including rugs by Studio Job and Sam Baron 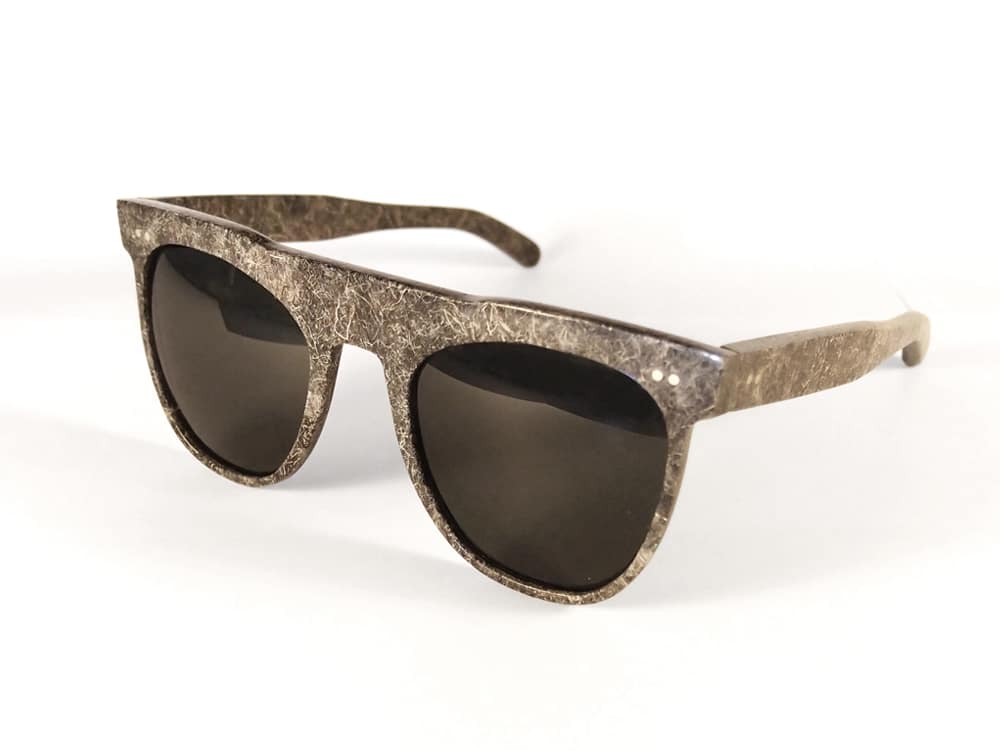 Solidwool X Fanoptics Ram Sunglasses showing as part of Designersblock in Tortona. A collaborative project between Solidwool and Fanoptics made using Solidwool (a mix of wool and resin), providing new innovative uses for wool 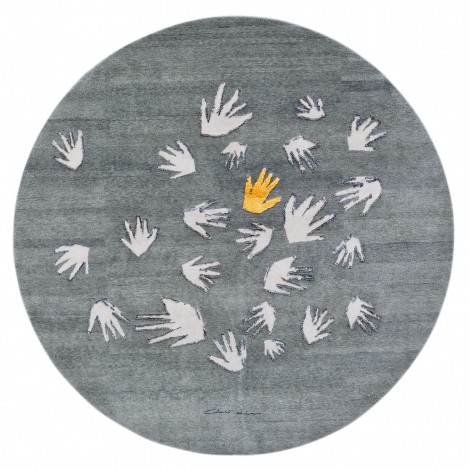 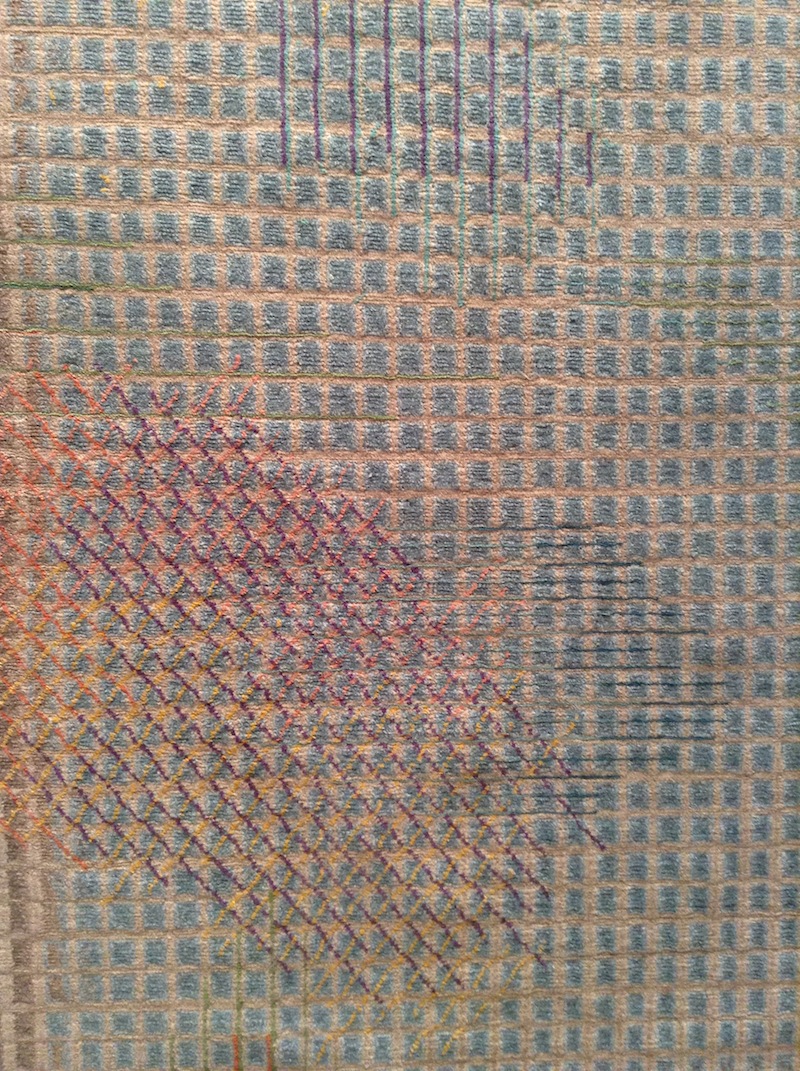 Meteo carpet detail by Inga Sempé for Golran at Salone del Mobile. The French designer Sempé has created a series of subtle rug designs for Golran, using a sophisticated range of colours and patterns 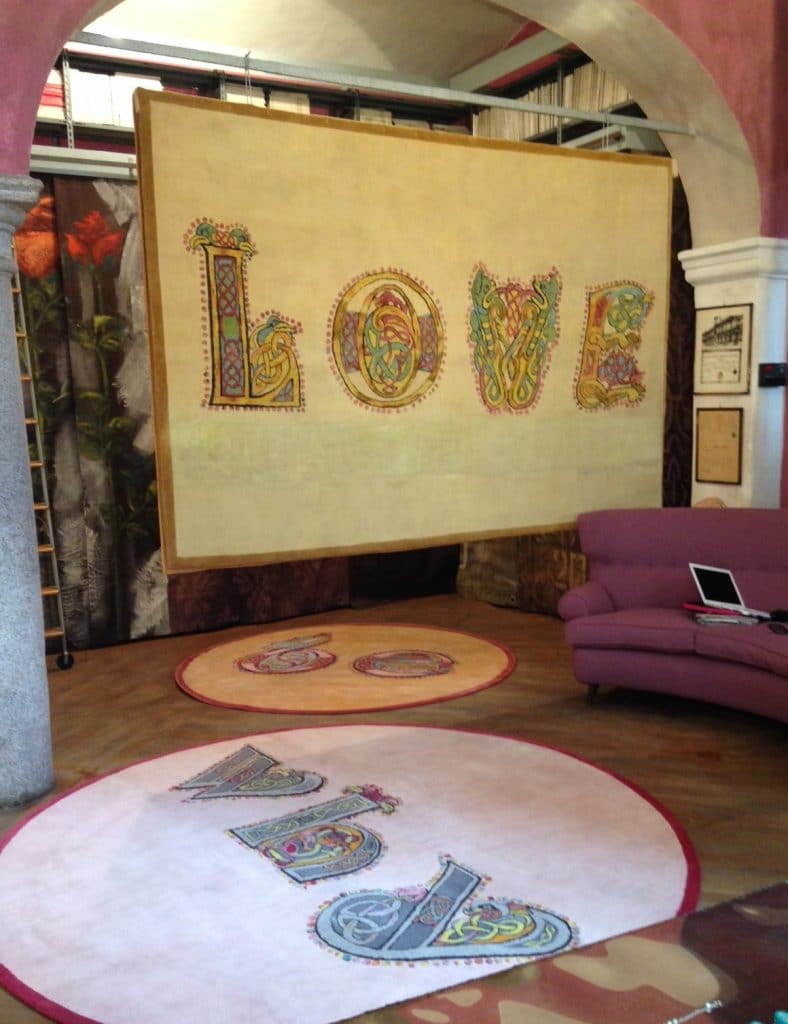 Rugs by Nuala Goodman. At Showlab Pellini on Via Morigi Nuala Goodman showed a new range of very original rug designs alongside fabulous jewellery by Donatella Pellini. Revisting the book of Kells, the celtic scripts on the designs spelled out words such as ‘Love’ and ‘Why’ 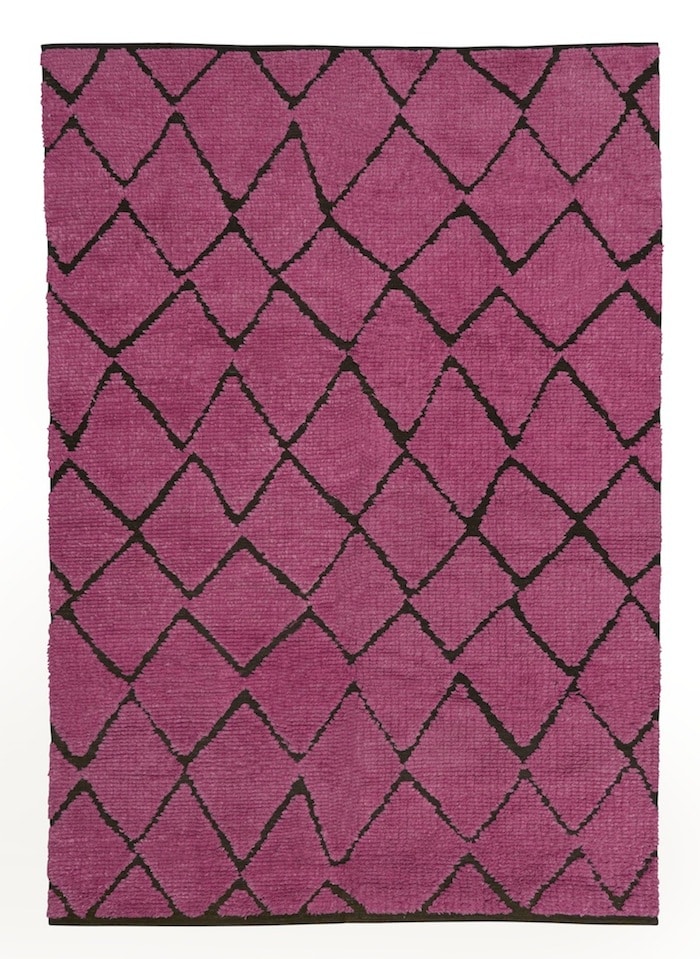 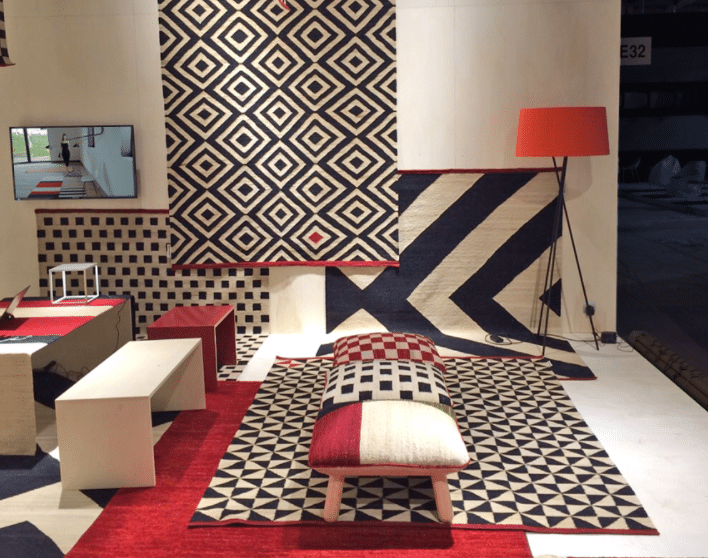 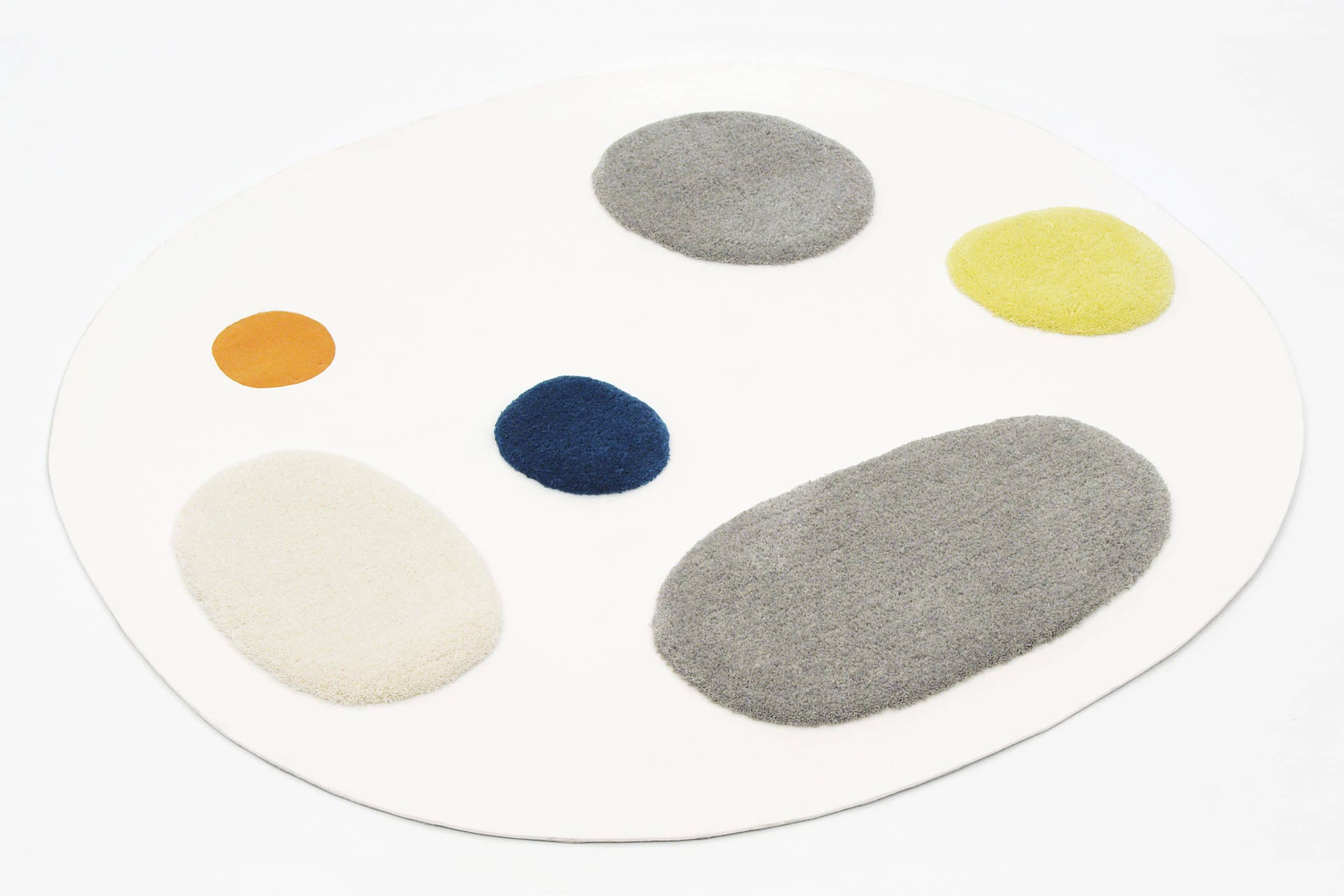 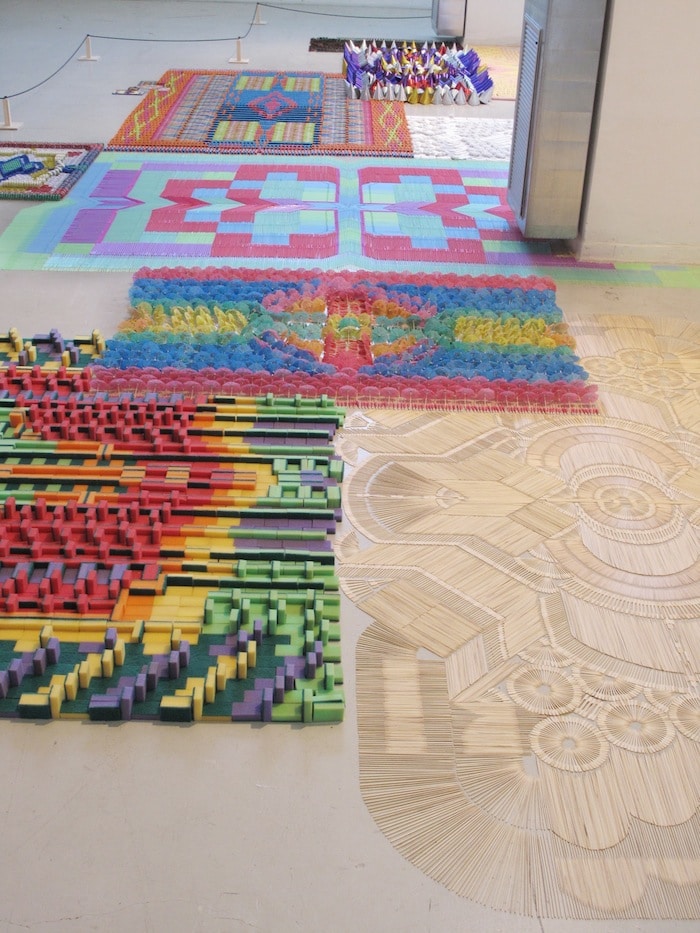 We Make Carpets at Ventura Lambrate. WMC took its ‘Kneeling’ exhibition, which showed at MU last year, to Milan for 2015. The scaled down version of the show looked fantastic in a large Ventura space with rugs made of sponges, pasta, soldiers, cotton buds, cocktail umbrellas and straws 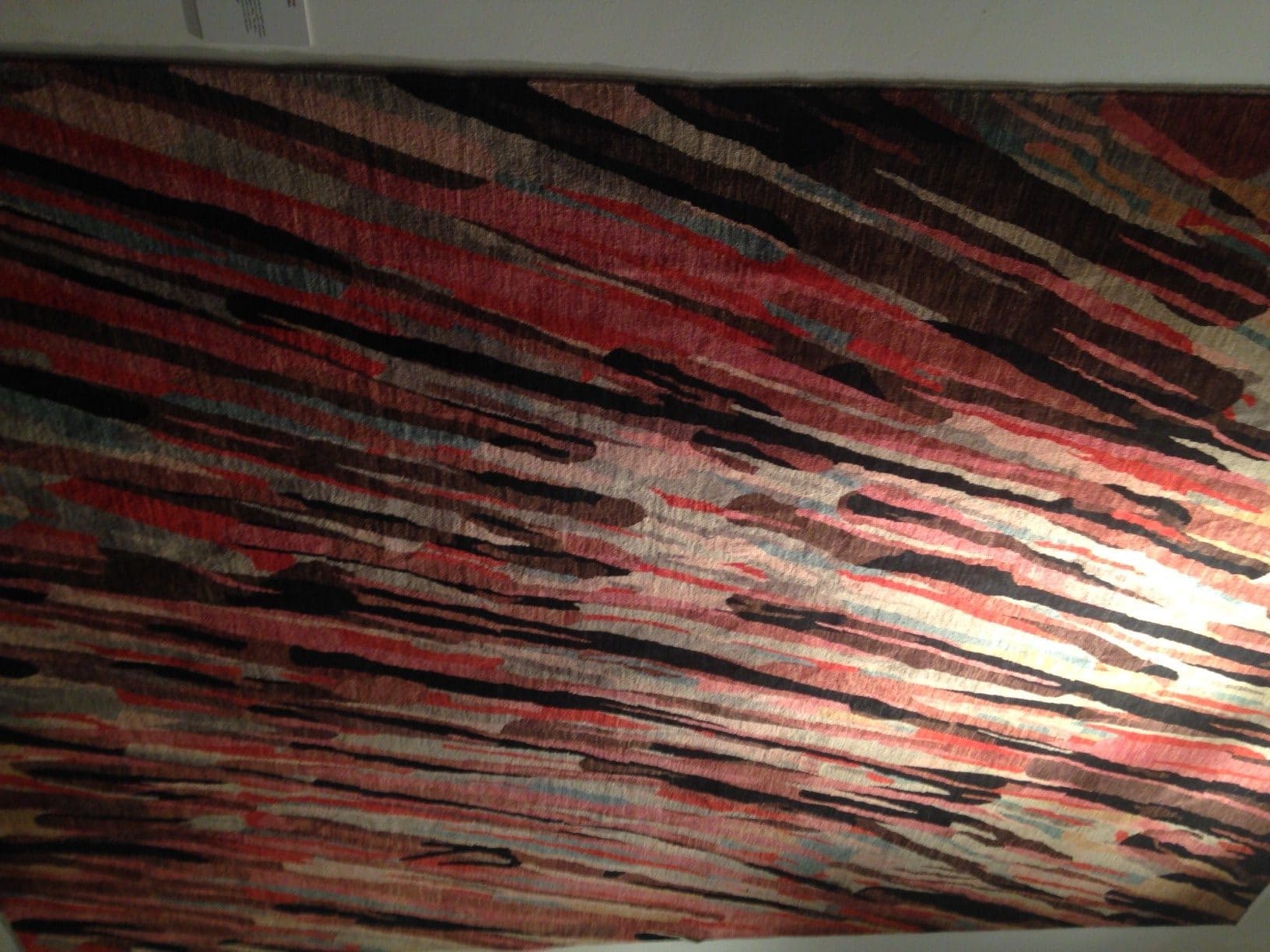 Detail from rug by Wool & Silk form the AfghanMade project showing at the Wallpaper Arcade. The AfghanMade show featured designs by Christopher Farr, ABC Italia, Nodus, Wool & Silk and a host of other rug names, demonstrating the skill of Afghan weavers 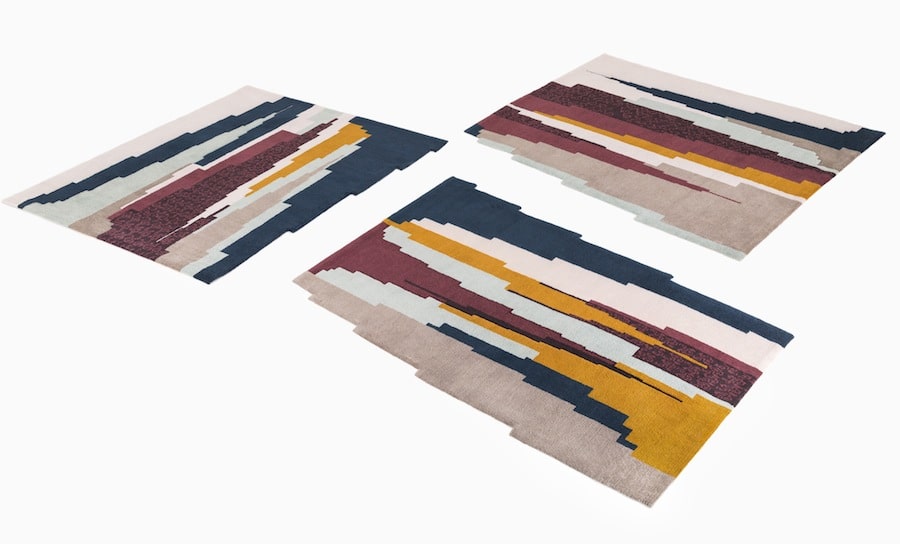 Khalid Shafar rugs showing at the Wallpaper Handmade exhibition. Dubai-based designer Shafar, who last year displayed Talli, a series of rugs made by Tai Ping, returned to Milan with a new collection of attention-grabbing carpets 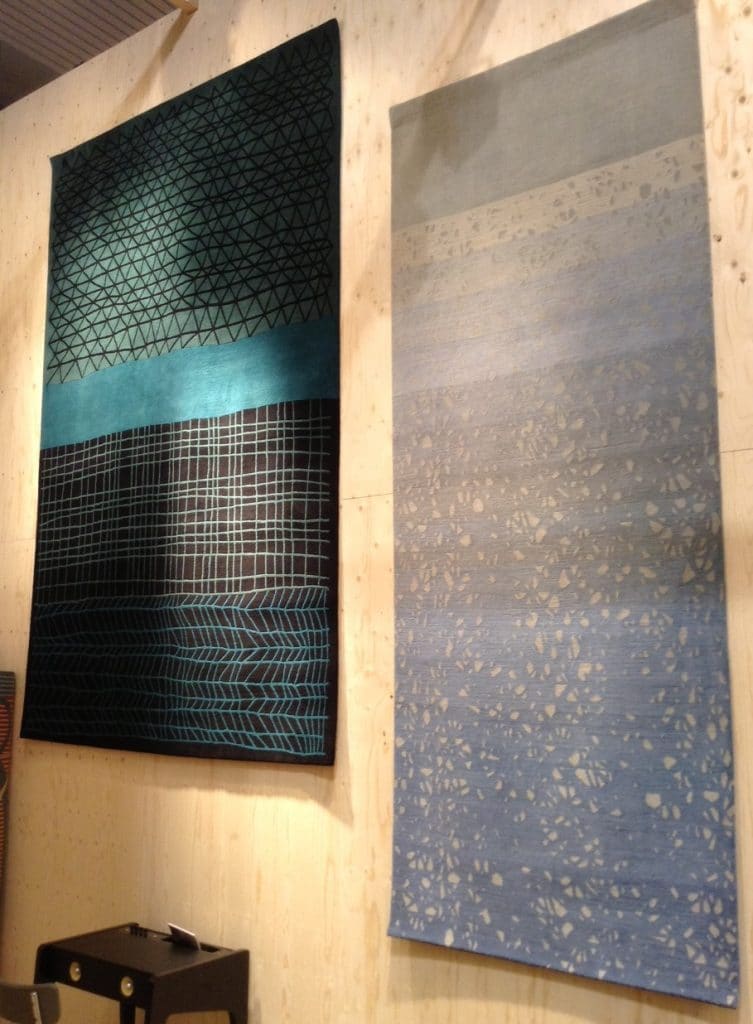 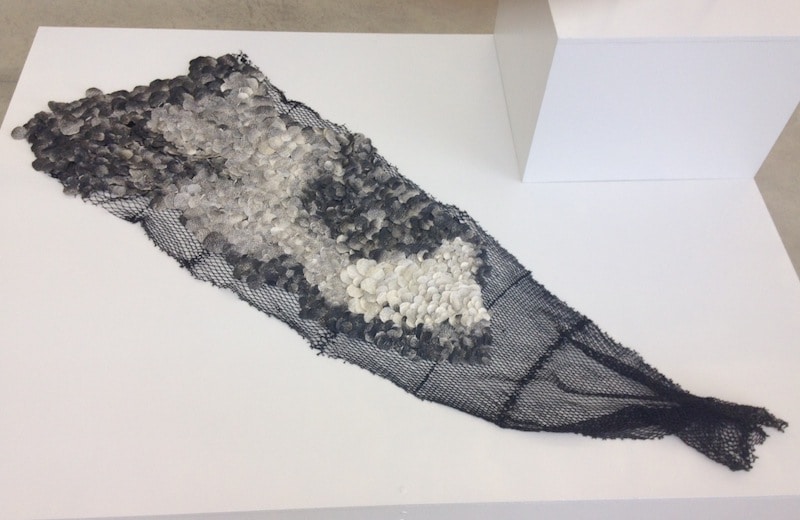 Sea Me 2 rug by Nienke Hoogvliet, a rug made out of fish skin leather, showing at Ventura Lambrate. Last year Hoogvliet created the Sea Me rug made form yarn formed by sea algae. This year she returned to the sea with designs made from fish skins, which are surprisingly robust and need no extra treatment. Fascinating!

When it comes to variety, it’s hard to beat High Point Market. Here we look at what is in store for October 2022