Liz Collins' exhibition at Touchstones Rochdale ends this week. Here COVER looks at the message behind the work on show 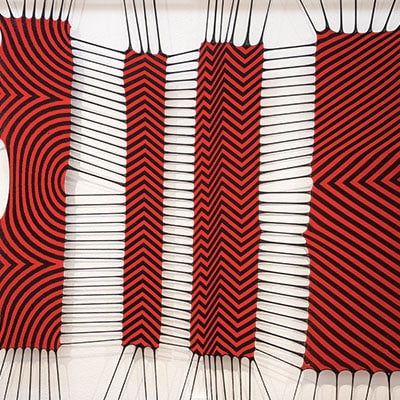 It was the exhibition’s guest curator Julia Bryan-Wilson who came up with the title of ‘Mischief’ for Liz Collins’ show. In an interview with the artist and the curator on the Brooklyn Rail website, Bryan-Wilson says: ‘To me Liz’s work mischiefs the boundaries between art design and craft, between abstraction and figuration.’

Collins met Bryan-Wilson while teaching at The Rhode Island School of Design, and with her vast knowledge of Collins’s work BryanWilson was the obvious choice for the artist’s first ever retrospective, now on at Touchstones Rochdale.

Collins’s creative career began as a fashion designer, though she is keen to point out that she was always first and foremost an artist. She eventually shifted her focus from textiles on the body to immersive bodies of work, using textiles as metaphor for sexuality and the disruption of the boundaries between art, design and craft. The four gallery rooms highlight every aspect of her work, from small embroideries and fashion shoots to large-scale textiles and rugs recently made with Emma Gardner and ZigZagZurich.

In the interview Collins points out that, when observing her own work on show, she sees that despite the changes in period and approach the energy has remained the same. The unfinished, unpolished nature of the work is an aesthetical choice to denote decay and ageing. ‘I like the tension between something well made and looking like it will fall apart,’ Collins explains.

Touchstones is not only situated in a location with a long history of textile production but also more recently it has been a venue to exhibit feminist art practice. Collins was invited to display her work as a queer artist, and part of the show has been opened up to queer artists from across the globe and from local LGBTQ+ groups. This section is an exhibition within an exhibition, set up like a salon, with textiles, rugs and wallpaper designed by Collins.

In the past, when she used to talk about her artwork, Collins would not mention the word ‘fibre’. This has changed and her exhibition is just one fantastic example of how textiles found its rightful place—and that in art there is no room for prejudice.