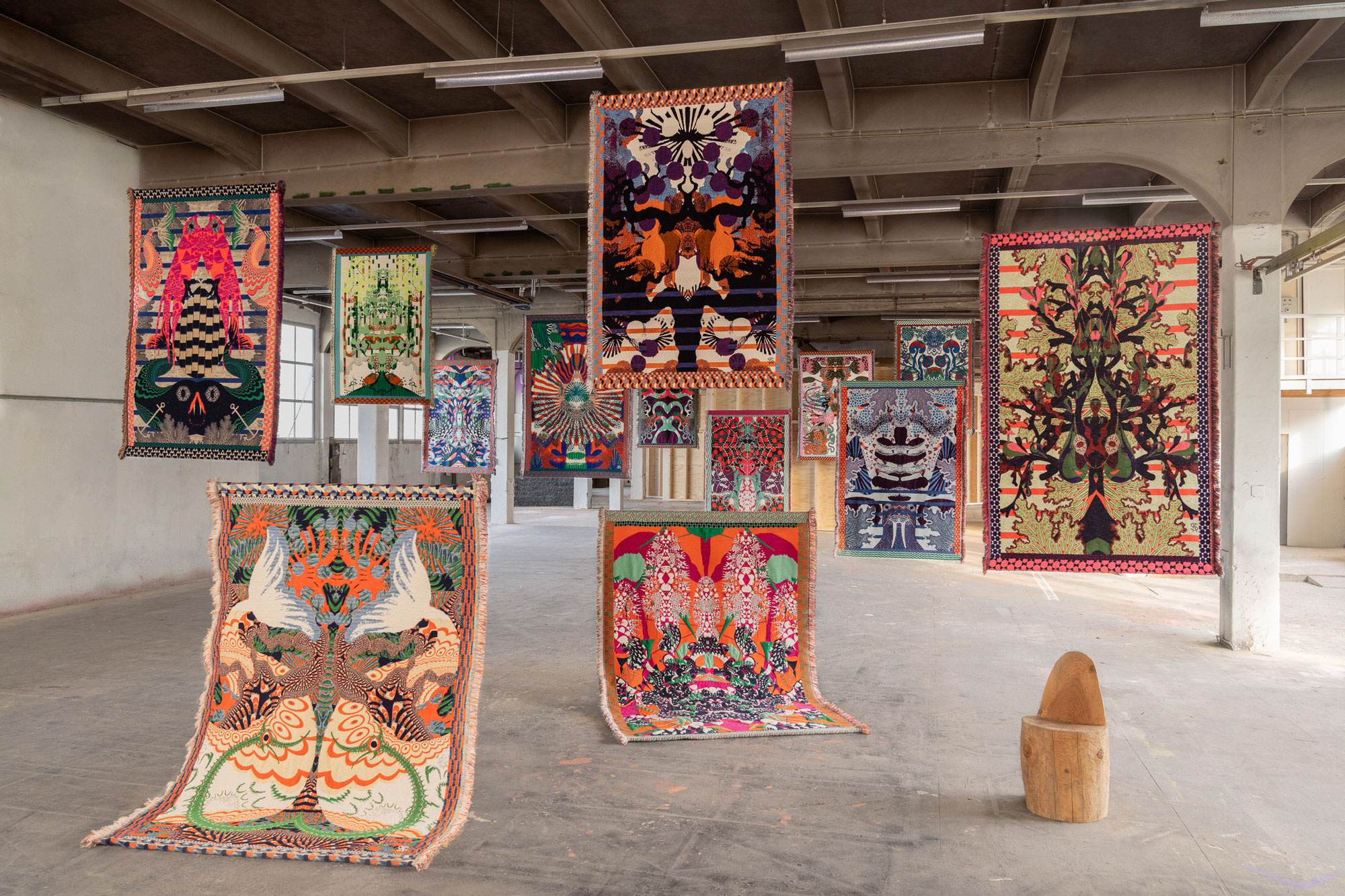 The magical world of Amsterdam-based artist Kustaa Saksi is on show at Aboa Vetus Ars Nova, in Turku Finland, which is hosting the ‘Kustaa Saksi: Aura’ exhibition until 9 September 2022. To celebrate the wonderful, surreal textile designs of Saksi we revisit Lucy Upward’s three articles about his work in COVER magazine.

During that ever-so-fragile moment between sleep and waking there are moments when we find ourselves in a state of genuine confusion. Our heads are still full of dreams and alternative realities, while our eyes are only able to observe solid ground. Some people suffer from this as a more serious condition, in which the visions can be very vivid and disturbing. The medical term is ‘hypnopompic hallucinations’.

The recent work of Amsterdam-based Finnish designer Kustaa Saksi is about just that: what he refers to as ‘a state of sensory confusion leading out of sleep, when the state of awakening gets mixed with the dream world into a surreal reality’. From this concept stemmed a series of eight tapestries, exhibited at the Korjaamo Gallery in Helsinki during August and September of this year under the title Hypnopompic.

Saksi produced the eight weavings at the brilliant Textielmuseum Tilburg, the home of a large proportion of the most innovative textile projects being made in Europe today. There he worked closely with Stef Miero, the TextielLab’s senior weaving developer. They created Jacquard weavings in an interesting range of materials that include mohair, alpaca wool, cotton, and synthetic materials such as phosphate and metallic acrylic thread. This range adds sparkle and texture and enhances the eccentricity of subject matter.

Saksi now has three new tapestries which are a sequel to the first collection. With the title Reveille, referencing the French word to ‘wake up’, it is clear that Saksi has remained true to the same concepts when creating the latest designs. He describes the inspiration behind them as ‘awakenings, morning light and spring’ and claims that they are less dark than the previous work – ’a soothing collection after all these nightmares’ – yet to me they seem just as enticingly bizarre and ghoulish.

The three tapestries are Hanging Loose, depicting a beautiful orange-and-black bat hanging and twisting its wings; Nightless Night, showing ‘moths and butterflies in the nightless night of the North’; and the slightly more dark and twisted Universal Egg – a complicated composition of constellations shown as strange animals in an egg-shaped cosmos. The designs are made of mohair and cashmere wool blends with rubber, acrylic, lurex and phosphorescent yarns.

During lockdown I was excited to see on Saksi’s Instagram feed a new stunning collection of thirteen works completed in 2020. In this new series, the premise is the same: exquisite patterns in bright colours, fantastical beasts and surreal landscapes, yet many of these compositions are organised around a central line of horizontal symmetry unlike the previous weavings. As to the subject matter they are no longer representations of bizarre effects of the brain but of traditional stories from around the globe: ’The works in my new series are based on well-known cultural mythologies’, Saksi explains. ‘From the Ancient Greek narratives and African tales to mythologies of indigenous peoples from Taiwan. I have interpreted the narrative through weaving, using texture and pattern. The result is a series of contemporary tapestries that incorporates tradition and craft.’