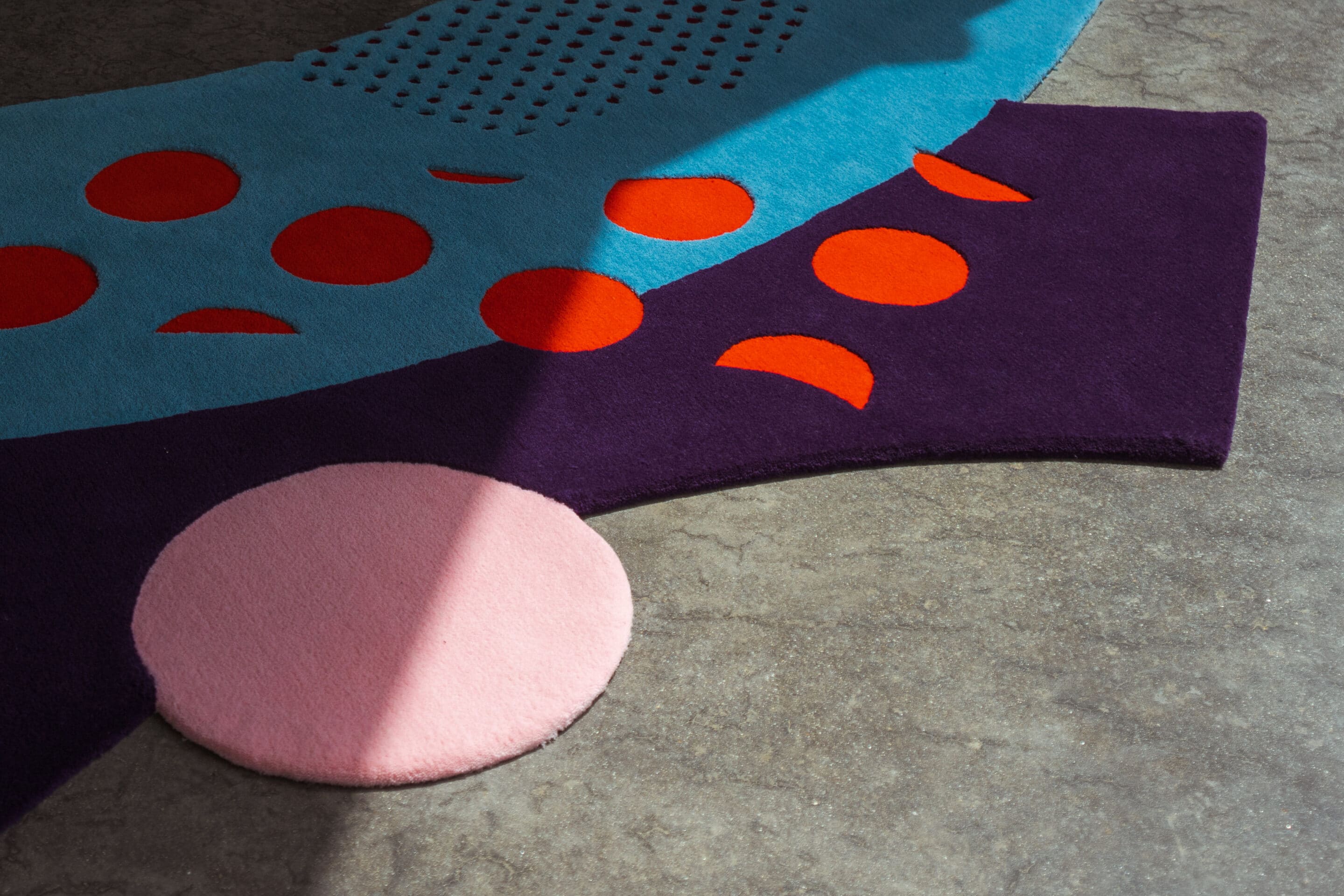 In 2019 Brown Thomas with the support of Cork City Council’s City Centre Placemaking Fund re-commissioned O’Driscoll (who had previously designed windows for Brown Thomas) to paint a mural in his signature ‘ting’ style on a disused urban power station. A scroll through O’Driscoll’s visually entertaining Instagram reveals ‘ting’ is a recurring word. A riff on Jamaican patois for ‘thing’ and well-suited to O’Driscoll’s West Cork accent, the first interview question cannot be avoided: ‘what’s the ting with ting?’ He laughs. ‘I just kind of always used it. I was a bit hesitant at first, but then it grew legs. It’s a way of making my work more accessible; a bit of craic’, he says, using the Gaelic word meaning fun, entertainment, and enjoyable conversation. ‘Legs’ include using ting as a suffix to emphasise the inclusivity of O’Driscoll’s work, for example, ‘interacTING’. Martina Navratilova, designer/maker at Ceadogán, points out with cheeky humour that O’Driscoll’s collection ‘might not in fact be rugs at all, but tufTINGS.’

O’Driscoll’s distinctive designs are bold colourful geometric elements carefully positioned on flat grounds. Primarily a printmaker, O’Driscoll also paints his tings on urban buildings and on discarded farm machinery, mainly on his wife’s family farm in West Cork. O’Driscoll deviated from his usual palette for his Ceadogán rug collection. ‘I wanted to push myself to be a bit different,’ he says, although his signature pink ting, beloved by his fans, makes an appearance. Conceived during lockdown, ‘Martina posted me samples and I took a month to experiment with colours.’ His Ceadogán palette pivots from his set colour palette where pink reigns as the result of a New York City restaurant commission where he was required to use the restaurant’s livery of pink, gold, and blue. The remaindered colours in his studio inspired him to re-imagine them for his print and mural palette.

‘Shane’s designs were perfectly suited to experimenting with pile heights and carving’, says Navratilova, a technical feature O’Driscoll explored to see how wool could express the texture of the high cotton content of the paper he uses for his prints. ‘You can see brush strokes in the texture of the weave and carving’, he points out, while Navratilova adds, ‘we played with pile heights to enhance a sculptural feel.’ Sculpting the pile also helps express the pareidolia of O’Driscoll’s designs, a word that describes ‘accidentally’ seeing faces in objects that aren’t intentionally created that way. O’Driscoll’s building mural for Waterford Walls International Street Art Festival 2018 sets the viewer wondering ‘is that black dot on the pink lozenge an eye? Is the perpendicular window its mouth?’ O’Driscoll doesn’t consciously create pareidolia, but he acknowledges people read his works in various ways that include ‘seeing’ faces. O’Driscoll studied Visual Communications at Cork Institute of Technology which helps understand how he hasn’t transferred his tings to rug design, but has instead critically assessed how to communicate through the texture and technical possibilities of wool and tufting while adding a new ting to his impressive catalogue of work.