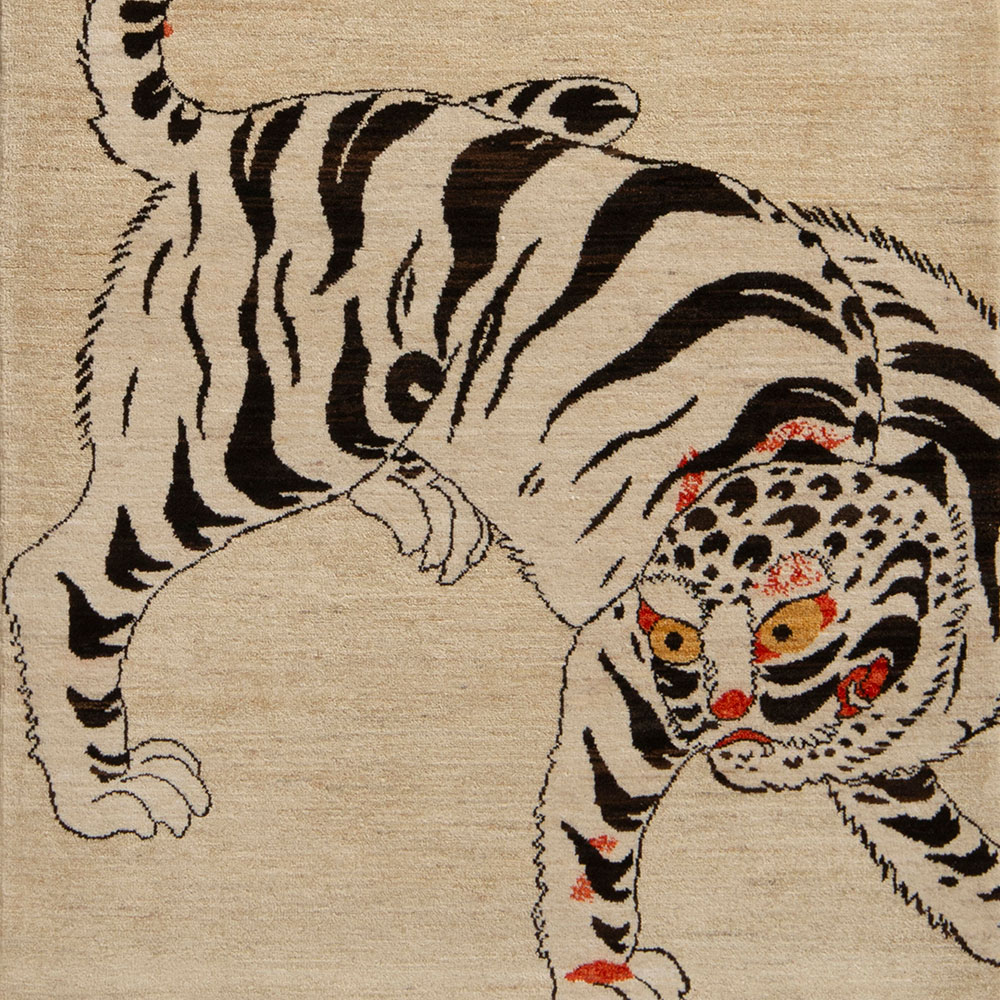 Rachel Meek reports on the new collection in COVER 63:

As one might expect, Rug & Kilim has a prolific output of rugs and kilims. The company states that ‘positioning ourselves as an atelier working with the best artisans and craftsmen in the industry gives us the confidence that we can bring your vision to life.’ The company’s new showroom in Long Island City, New York, is packed with samples, which— paired with founder Jahanshah ‘Josh’ Nazmiyal’s encyclopedic knowledge of antique rugs—makes it an essential destination for those looking to make the bespoke rugs of their mind’s eye a reality.

So with so many options and sources of inspiration at its fingertips, how does such a company celebrate its 40th anniversary? With another collection, following in the award-winning footsteps of 2016’s Scandinavian and 2020’s Homage, that is at once classical, strikingly of its time and surely set to make the hearts of many rug buyers, interior designers and discerning clients flutter… With tigers.

Usually solitary creatures, eleven big cat rugs are part of the initial ambush, but each design maintains its very own distinct character. From the majestically menacing to the mortified scared, the weirdly whacky to the beguiling charmer, these creatures are larger than life and ever so elegantly styled by collaborator Teddy Sumner, whom Jahanshah has known for more than 30 years. ‘From the very first day that he came into the industry, I always found him quite dedicated and capable, so when I thought that I could collaborate with him, I open-heartedly agreed,’ Jahanshah says of the partnership. The pair were clearly enthused by the possibilities of their own tiger rug brief. After agreeing upon the designs, the rugs were woven in Afghanistan through Sumner’s contacts. Jahanshah is impressed by the results. ‘Creating faces is not always very easy, and I am very excited about how each one of these pieces really has a whole character. I love that they have attitude. I was really moved by that,’ he says.

Sumner says of the project, ‘It has been a pleasure collaborating with Josh. In Asian culture, the tiger is such a rich image as a symbol of power, wisdom, and trancendance. The creation of a scatter rug as a design accent rather than a room-sized carpet, to which the rest of the room is anchored, gives the designer much more freedom. It’s fun!’

The deep well of source material is evident in the collection which skips lightly between influences such as Chinese painting, Indian miniatures, Persian tribal weaving and traditional Tibetan tiger rugs, which were only brought to light outside of Tibet in the 1989 exhibition ‘Tibetan Tiger Rugs’ in Milan, and seen again more recently via the Tomorrow’s Tigers project by WWF (see COVER 53).

For those looking for a more subtle animal presence, there are abstract pelt-like designs in an attractive colour palette, capable of lending just an essence of animal print.

So what can possibly follow the tiger parade? ‘What I’m excited about is referring to our library of textures and patterns,’ Jahanshah says. ‘In many ways I’m a traditionalist, although more than 70-80 percent of what we’re selling today is ending up in a more modern setting. A whole host of new designers and artists are going to be inspired to do something with us. We invite them to think of carpet design when they are being creative so that we can offer them a different medium for their artwork. This is what keeps me going. It’s going to allow me to meet a lot of very exciting people.’

It seems we can expect the future of Rug & Kilim, and its ongoing collaborations, to be just as visionary and characterful as these cats!