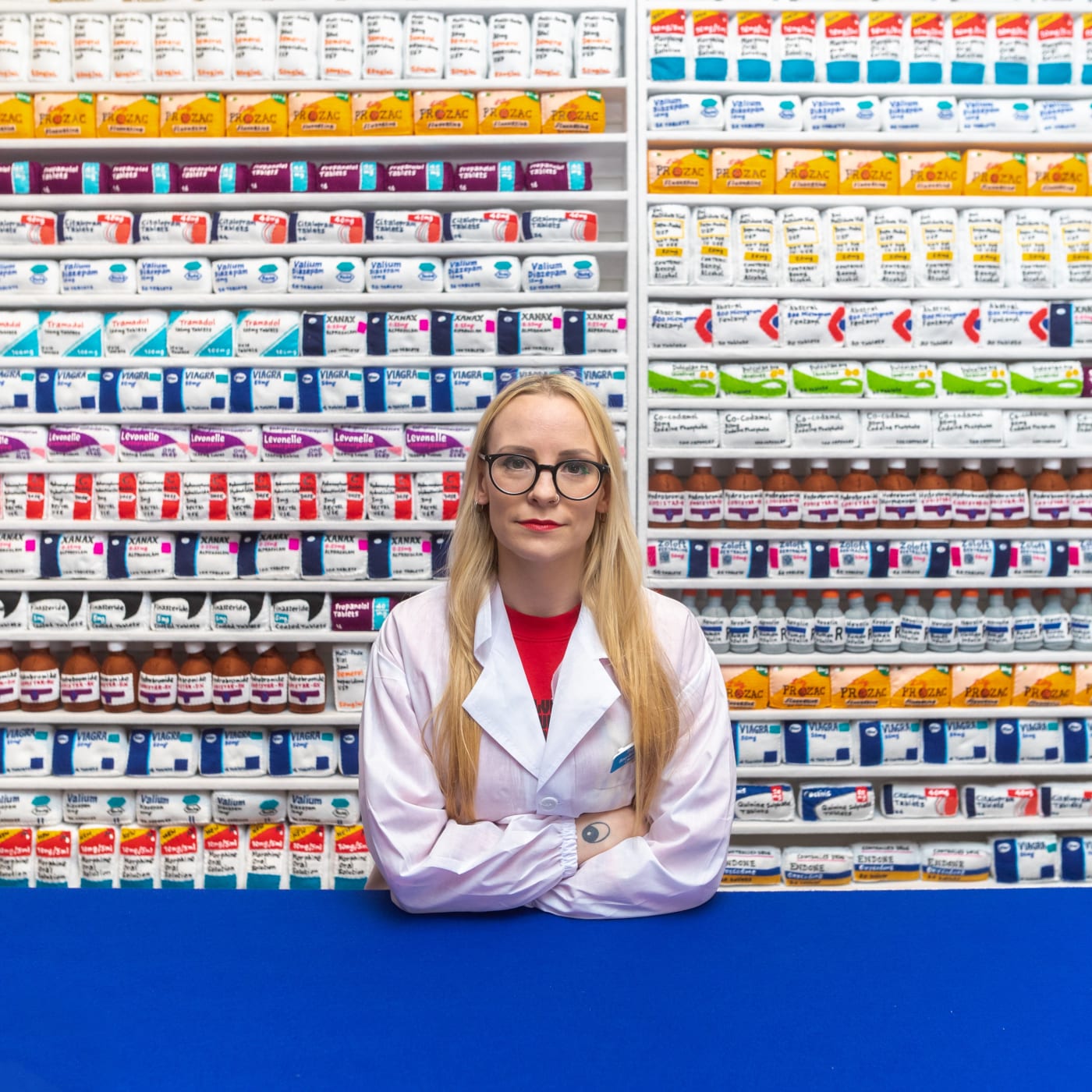 The artist-as-faux-pharmacist, Lucy Sparrow was ready to greet visitors and prescribe remedies at The Bourdon Street Chemist—a temporary art installation at Lyndsey Ingram Gallery (19 April – 6 May 2021). Riffing on Britain’s National Health Service (NHS), Sparrow’s project was created under her NFS (‘National Felt Service’) slogan. Clad in a white pharmacy coat, she was on ‘duty’ daily in the gallery at her pharmacy counter in front of shelves chock-a-block with neatly arranged multiples of name brand items that created the saturated colour-blocked look of a real pharmacy. Each and every object is made from felt by the artist and a team of assistants she describes as ‘Team Felt’.

Sparrow describes how she leans across the counter to listen attentively while visitors described their ailments and awaited her ‘prescription’ which the visitor can then purchase as a felt multiple. The intimate nature of describing ailments was an interactive feature of the installation, and unsettlingly perhaps, Sparrow describes how she talked ‘loudly’ when a visitor described a particularly embarrassing ailment. ‘There’s no need to be ashamed!’ she says. On a topical note, Sparrow’s pharmacy items included COVID-19 testing kits.

It took more than two years to create the thousands of felt pharmacy products. Each one was (and many still are) for sale. While it might seem impossible to confuse Sparrow’s cheerful felt products with the real thing, the overall effect of the ‘pharmacy’ shop front as seen from the street was incredibly realistic. Although the gallery’s Mayfair location is a luxury locus, and not an area known for corner shops and chemists, Sparrow say that people did wander in saying they didn’t realise there was a chemist on the street.

Sparrow has experience as a felt ‘forger’. Bourdon Street Pharmacy is her seventh major felt installation. Sparrow’s felt-based retail experiences have appeared internationally including a supermarket installation in Los Angeles that featured thousands of grocery and fresh food items made from felt. The impetus for her felt fetish is to ‘create an alternate reality’ tied to the reassurance and comfort the soft fabric creates and for its links to escapism. Sparrow says it’s impossible not to feel nostalgic and joyful when she’s ‘surrounded by felt.’ The dual meaning of ‘felt’ as a fabric and what visitors ‘feel’ when they visit her felt installation is another reason for Sparrow’s attraction to the material and for the public’s overwhelming affection for her felt creations.

Sparrow’s ‘pharmacy’ items are available for sale on her website www.nationalfeltservice.com