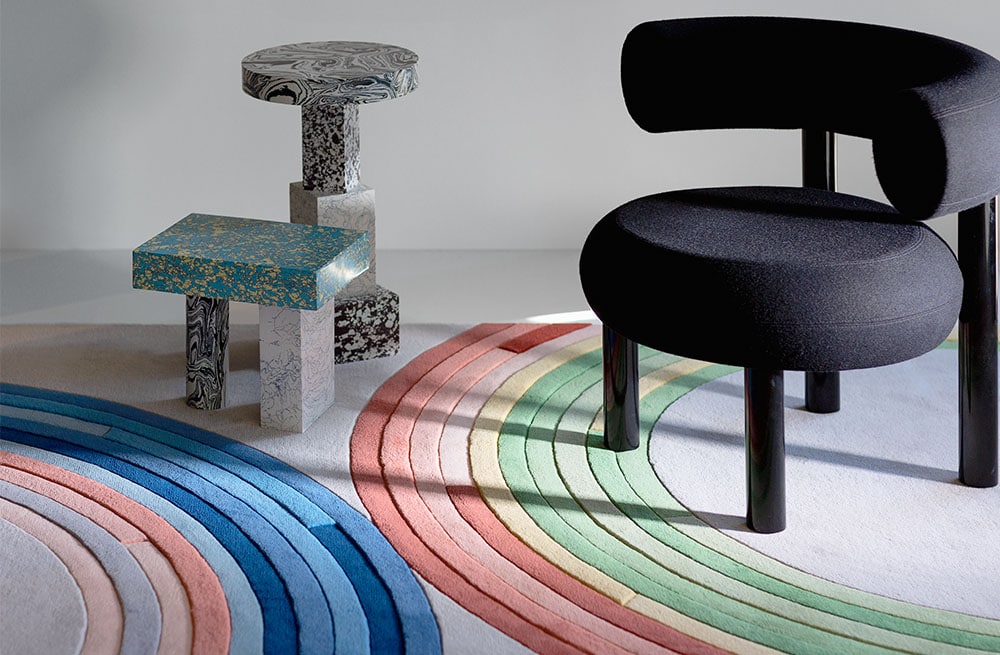 Round and round and round she goes and where she stops nobody knows! This mystical sounding incantation associated with the wheel of fortune at carnivals is used to describe an unpredictable situation. Given the circumstances of 2020—a global pandemic—most of us would like the wheel of fortune to stop immediately on something universally pleasant. While the wheel of fortune is fickle, circles are divine, sometimes in a literal sense. So can there be a better shape for a new 2020 rug collection than the reassuring and eternal shape of the circle? We don’t think so and neither does one of Australia’s top interior designers, Gavin Harris.

Circles have ancient significance across cultures and religions, but circles also command attention in popular culture. Circular Logic is Harris’ second collection for Designer Rugs after his inaugural collection Mindscape. Harris set a brief for himself to examine how a single element—the circle—can be developed in different forms and interactions. How can circles connect or repel each other like the north and south poles of two ‘duelling’ circle magnets? How can overlaps and overlaid lines catalyse the simple universal circle? Aside from these questions, Harris’ designs and ‘joyful’ colours for the collection are also influenced by 1980s popular culture.

Harris’ Magnetic rug is a round shouldered lozenge with two internal circles that briefly ‘kiss’ then disappear off the rug’s edge. Adding to the intrigue, each circle has multiple internal circles that resemble a simplified graphic of an electromagnetic particle accelerator, while the colours and implied motion of the graphic hark to the video game universe of 1982 cult classic sci-fi film Tron.

Harris’ Thermal rug is a circle that maintains its perimeter until it disengages to create a squared corner. The interruption of the circle creates the best of two worlds for the homeowner; a squared edge that can align with the leading edge of a sofa and a round shape that flows out into the room. The design of the round rug Circuit—particularly in its original colourway of greens, charcoal, and taupe—suggests a circuit within a computer’s motherboard—another reference to the 1980s as the decade when home computing started to take off.

‘I like the circular form; it’s soft but controlled,’ says Harris. ‘It can sit comfortably with other elements.’ Hand-tufted in New Zealand wool, every line is hand carved to create a sharp, graphic quality that enhances each pattern and shape. Varied pile heights create a three-dimensional interest, while each of the collection’s four designs can be custom sized and palettes customised from a selection of hundreds of yarn poms.