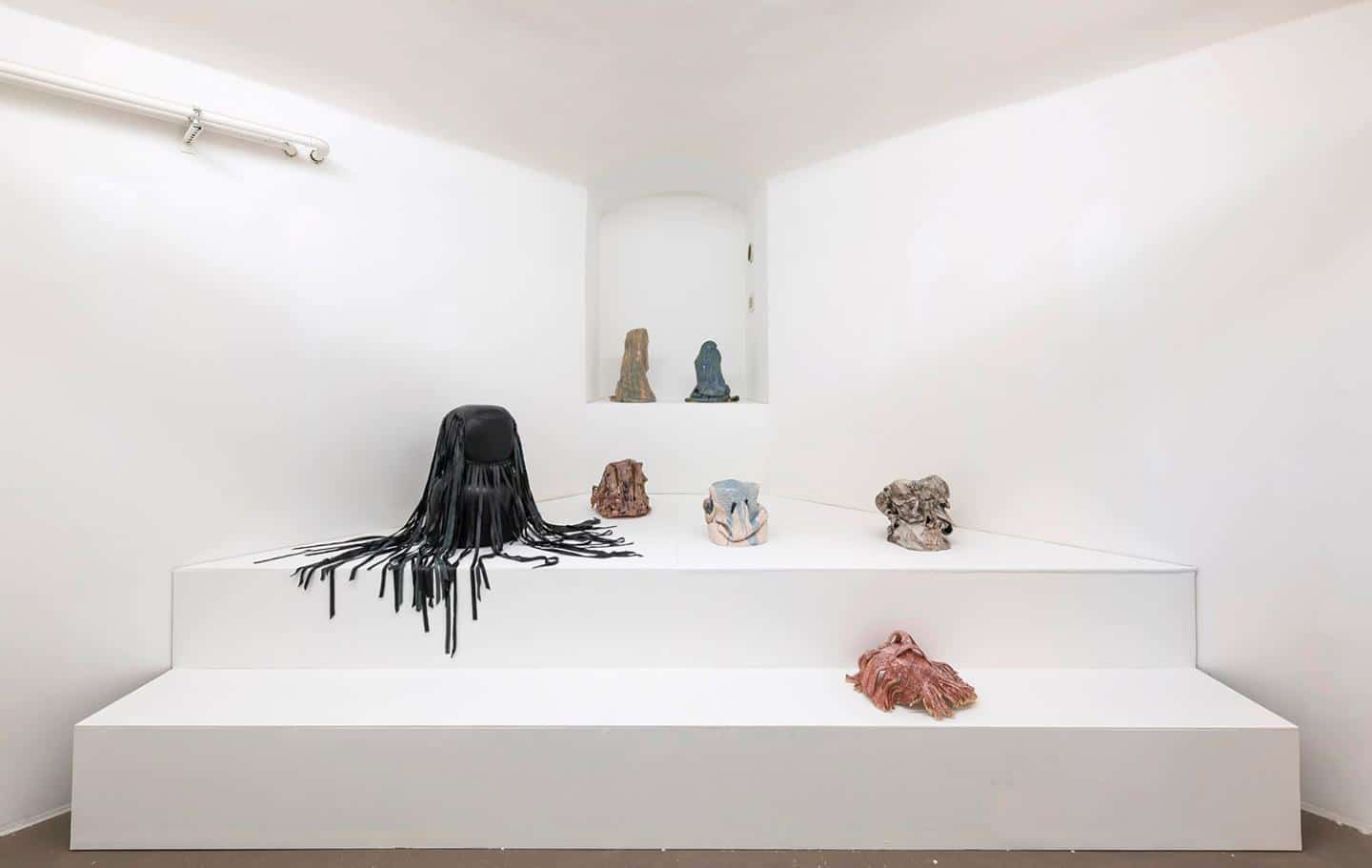 It seems a reasonable guess that come All Hallows’ Eve artist Caroline Achaintre will be safely tucked in bed watching scary films through scissored fingers. The brief period between the end of October and the first week of November is when many cultures believe barriers between visible and invisible worlds are breached. Achaintre says her work ‘always hovers between the two and three dimensional,’ but her body of work over the last two decades—particularly her mask-like ceramics and tapestries—also reveal a key influence is dimensional reality beyond our day-to-day observable world.

Ritual cultural events like Halloween and Day of the Dead are also events associated with mask wearing. Born in France, raised in Germany and a longtime London resident, Achaintre is well-known for her slightly unsettling yet compelling (and sometimes humorous) mask-like 2D and 3D art. ‘Gory imagery has always been an influence,’ she acknowledges. Reluctant to reveal the titles of horror films that influence her (‘I watch them under the blanket,’ she reveals), she echoes previous interviews when she states duality (light and shadow, good and evil and more) is always present in her work.

But Achaintre is inspired by more than horror films. Other influences are early modern art movements like Primitivism and German Expressionism (whose artists were influenced by the horrors of World War I), the spectacle of carnivals (‘there’s something morbid about them,’ she revealed in a 2016 Baltic Art video), and historic events associated with masks such as beaked plague doctor hoods as she interprets in her 2020 tufted tapestry Louis Q, and medieval morality plays and ‘schandmaske’ (mask of shame).

Achaintre’s long residency in the UK also seems to seep into her work. Todo Custo (2015) is a notable predecessor to her recent tufted masks. A cascading ‘beard’ of loose fibres hangs from a single eye. Pinkish-red tufts might conceal a mouth. The asymmetrical shape is fantastically ‘head-like’ yet nothing is truly representational. The whole hints at a mysterious link to the tradition of English myth and literature, as though her tufted surface is a thicket where Grendel’s fearsome, nameless, monstrous mother lies in wait for the hero of the ancient English poem Beowulf.

Achaintre learned how to weave tapestries from Helen Weston who taught Constructed Textiles at Goldsmiths, University of London. ‘I love the process,’ says Achaintre. ‘I’m always discovering a new language within the technique,’ she told Baltic Art. Tufting is ‘an expressionist way of working’. As with all gun tufting, Achaintre works behind her upright framed canvas. The work is guided by a design but the process is intuitive.

She intriguingly described to Baltic Art that a life force exists in her mask tapestries. In a Pygmalion-like wish—the sculptor Pygmalion created a beautiful statue that was brought to life by a mythological Greek god—Achaintre said her ultimate goal for her tufted pieces is to reveal a ‘charged being’ or a ‘kind of animated soul’ that might have once existed in another context. ‘If I manage to do that I don’t know,’ she said, but anyone who admires the range of beautiful and mysterious mask-like tapestries created by Caroline Achaintre will enthusiastically declare she has indeed achieved her goal.