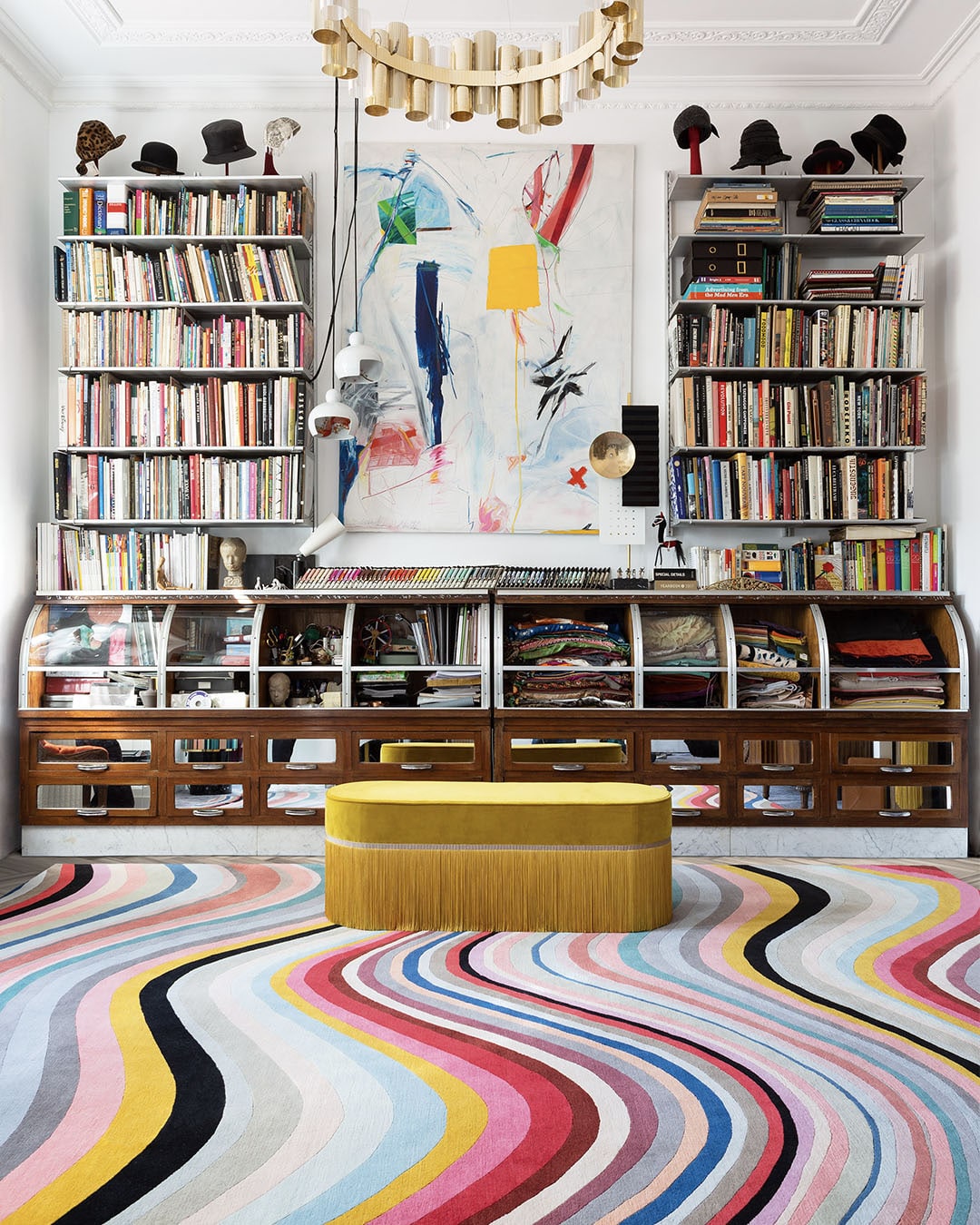 Swirl by Paul Smith is a pattern that has delighted design aficionados for more than twenty years. An evolution of his penchant for stripes, the swirl has adorned Paul Smith fashion from suits to shoes, and accessories and interior products from diary organisers to rugs. Three years on from London-based The Rug Company’s (TRC) twentieth anniversary celebration of their founding in 1997, new iterations of Paul Smith’s Swirl rug mark the twentieth-anniversary of TRC’s inaugural collaborations with iconic designers.

Swirl is an onomatopoeic word that conveys a sense of shape, a feeling, and even a sound like the machine whirr when a swirl of soft serve ice cream coils into a cornet wafer cone. But the dictionary definition of swirl differs from Sir Paul’s interpretation. A swirl is a concentric spiral pattern. Paul Smith’s swirls are no such thing. His swirls are interrupted. His stripes embark on a wild roller coaster ride where the G-Force stretches them into swirls that sweep, contract, dip, then suddenly stop. Or maybe Sir Paul prefers a stick of rock analogy where we imagine him in hairnet and white coat as he rolls out a molten mass of striped sugar to create a meandering swirl of the classic British seaside treat. Either way Paul Smith’s interpretation of a swirl is unconventional yet entirely in keeping with his reputation as a designer who views the world from a humorous, idiosyncratic perspective or, as he says with a smile, ‘we all have eyes to see, but mine seem to see things in a different way’.

The global success of the Swirl rug is undeniable. Hand-knotted in Nepal from thirty-two colours of handspun wool, Paul Smith’s first Swirl rug for TRC was produced in 2000. Swirl has appeared in seven colourways since then, and Sir Paul has designed various versions of Swirl in his ten rug collections for TRC. Swirl is found in homes across the globe. Twenty years ago it was the unconventional but inspired choice of designer Kelly Behun (who has also designed a collection for TRC) for her children’s nursery. The new 2020 collection introduces four iterations of Swirl. Modern Swirl introduces new colourways of the classic pattern. Illusion is horizontal stripes with tapered vanishing points. Artist Stripe is horizontal planks like a top-down view of wood flooring. Interval seems to nod to the early days of television when SMPTE colour bar test patterns appeared on home television screens as an aid to tuning the television monitor.

Described by TRC as ‘our most colourful collaborator,’ Sir Paul’s renown as an international designer (he is hugely popular in Japan, for example) with quirky but classic British style was nurtured in the swinging ’60s (he turned 23 in 1969) and burnished over the ensuing decades. He founded Paul Smith fashion in 1970 and settled on a style that he describes as ‘classic with a twist,’ ‘quirky but not frivolous,’ and ‘eccentric but not silly’. The year 2020 is a double anniversary for Sir Paul as it marks not only twenty years collaborating with TRC, but twenty years since he was awarded a knighthood. So happy anniversary Sir Paul. May the quintessential British flair of Swirl continue to capture the hearts of generations to come.