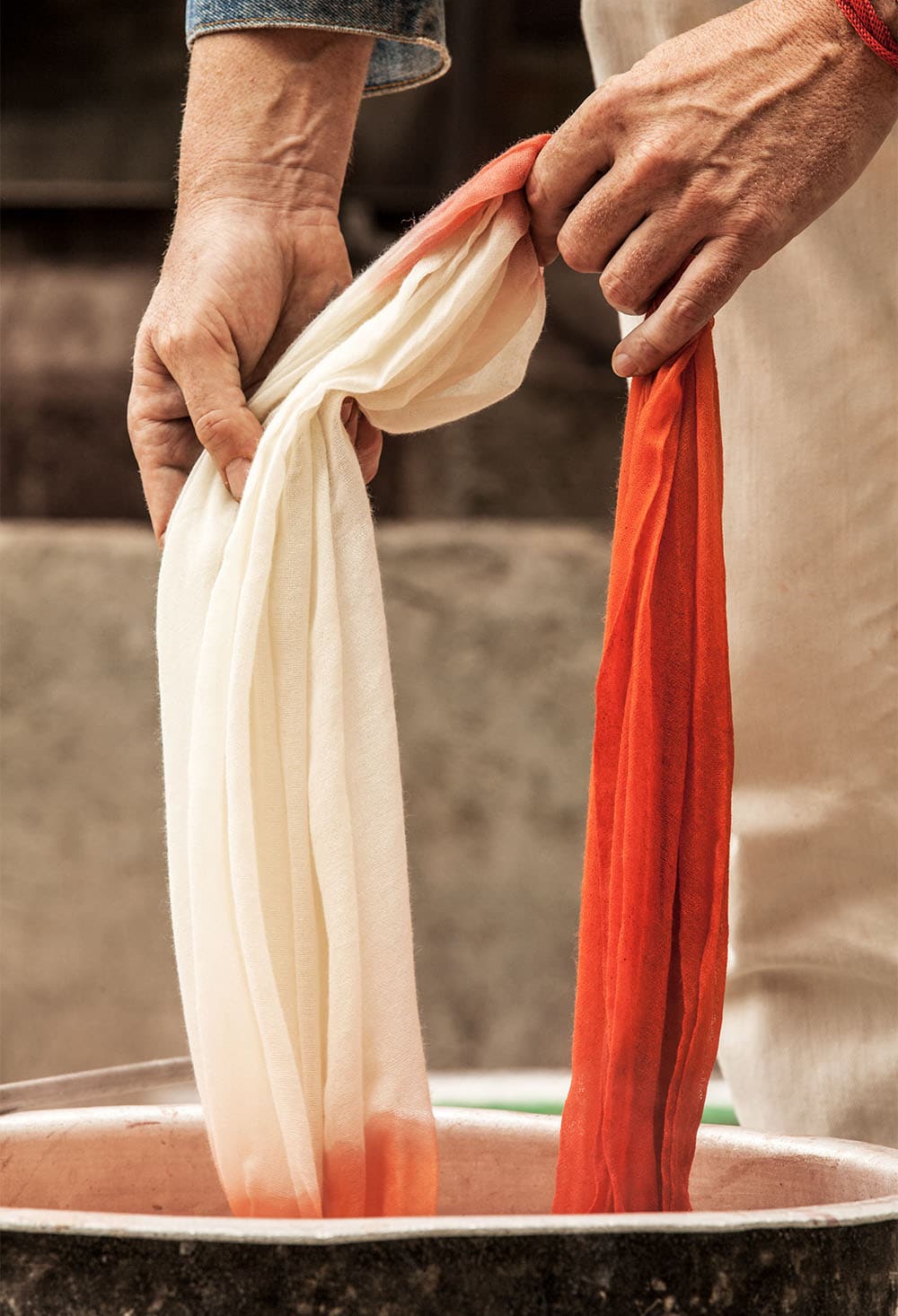 Mind and body come together when I make a rug. Using medicinal plants to make dyes is one of the key ways I accomplish this. The plants I use to create colours are the same plants primarily used as Ayurvedic medicines. I’m interested in the possibility of how the colours we make are connected to the healing properties of these plants. So much time is spent working out designs, selecting fibres, and preserving ancient techniques; why wouldn’t I invest the same amount of time—or more—making holistic natural dyes? In Ayurvedic medicine the three doshas need to be in balance. The same principle translates to colours and how they affect us psychologically and physiologically. For more than twenty years I’ve been learning ancient dye methods and rediscovering long-lost dye recipes to create rugs with what I believe are healing colours. Sometimes I think of what I’m doing as akin to a cultural heritage preservation project—preserving Asian natural dye processes and supporting traditional dye masters.

I once made an incredible optical rug called Vibra for Beyoncé and Jay-Z. I’d made the design two or three times before they ordered a huge one—23 x 16 feet or so. Vibra is three colours in a semi-pointillist fashion that creates interesting optical effects. Fuchsia-red, a saffron shade of yellow, and indigo blue ‘fuse’ as they spiral from a central point. As you move away from the rug the opticality enables perception of colours that aren’t there —purple, orange, and green—but as you get closer they disappear. I think Vibra is my favourite optical rug because the colours are so magical. When we laid the rug in their living room Jay-Z smiled, dove down, and made snow angels in the silk pile.

In the late 1980s I was dealing in collectible rugs, mostly Turkish, Turkmen, Persian, and Caucasian. If a carpet had even a hint of synthetic (aniline) dye we avoided it like the plague. Rug collectors wanted naturally dyed rugs. In the mid-19th century chemical dyes started to appear. Faded pinks and purples and bleeding oranges and reds indicate synthetic dye. Pink and violet were hard to make with natural dyes, although you can get a really good strong pink with certain insect dyes. It’s also expensive to make these colours naturally, so it’s not surprising there was a shift to cheaper aniline dyes. Shorter dyeing times, ease of use, and commercial pressures were more reasons to use aniline dyes. Specialist dye masters were where you would bring your yarns for dyeing, but with synthetic dyes, it became possible to dye yourself. Older synthetic dyes tended to fade quickly. Dig into the pile of an old rug for the centre of the knot and you’ll find the original colour. If you see a camel colour on a 19th-century Persian rug you know to check the knot interior to see if it’s purple. Synthetic dyes would run and bleed into other colours and onto the warps. Knowing dyes can help you tell where a rug was made and when.

In the past, rare and expensive dyes were reserved for the best wool. If you have an extraordinary colour you want to use it on extraordinary wool. You tend to match up the quality of your materials, and this is the process I follow. Sometimes 50% of the cost of one of my rugs is the dye. If it costs thousands of dollars for a dye, you’re going to use great wool. Wool quality isn’t homogenous. Different sheep grazing at different altitudes produce different wools. The back of the sheep makes coarser and drier wool than the neck and belly. Lambs produce softer wool than old sheep. It’s all common sense when you think about it.

Being a dye master tends to be a family career and the knowledge is passed down generations. I had a great dye master from India whose father, grandfather and son were also dye masters. He was the one who taught me about the Ayurvedic, medicinal applications of the plants we use for colours. He had a wealth of knowledge. I always enjoyed sitting with him as we made dye, pumping him with questions about the knowledge and traditions he was passing along.

Currently I’m working with a woman who is a recent refugee from Tibet. She’s a great dye master who learned the traditions from her mother and grandmother. Her speciality is indigo fermentation dyeing. It’s one of the oldest known plant dyes. Indigofera is the plant type we use, but there are different indigo plants in Japan for example. When done correctly indigo blue is a very hypnotic and mysterious colour. The process can last at least several days but sometimes weeks. Indigo plants aren’t water soluble, they need a naturally occurring microbial starter to reduce it. More than one species of bacteria can create indigo blue, and each dye master has their own unique recipe. Indigo fermentation dyeing is a true art form because you can easily spoil it if you don’t follow the protocols perfectly. It’s not possible to discover these methods on your own, or by accident even, there’s too many counterintuitive steps. We also use fermentation for shades of red, yellow, blue, and green.

All dye recipes change according to geography because temperature and altitude change the recipes—you have to make a lot of adjustments. Bacteria changes too. Dye recipes are more than boiling a plant. Really bright colours don’t come directly from the plant—there are proprietary add-ins. The plants we use usually have medicinal qualities. Madder, walnuts, pomegranate, a variation of the sunflower, turmeric, Nepalese plants and shrubs are some of our dye sources. My experience is that certain people are innately drawn to naturally dyed rugs. I once made an experiment by hanging a madder dye red rug next to synthetic red dye rug. Both were similar in colour and abrash, but our clients were drawn to the naturally dyed rug. My theory is that natural dyes have many overtones of hue whereas synthetic dyes don’t. People are drawn to the natural world. Musically speaking it’s the difference between live music and a compressed audio file. Natural colours just speak with more complexity and vibrance.

Dye and material determine the mordant you use to fix—’bite’—the colour to the material. Basic mordants are mineral salts, copper, iron, alum. Synthetic dyes today are not as toxic as they were in the past because we no longer use heavy metals, but they’re still not exactly healthy. Natural dyes have a more sound ecological footprint. The Swiss chemical company Sandoz made chromium dyes. In the rug industry we call these ‘Swiss dyes’. They’re strong and light-fast, but run-off was toxic. We don’t use chrome dyes nowadays, but it’s ironic how the more toxic the synthetic dye, the more beautiful the colours.

Brad Pitt Pink is a pinkish-red colour I made from shellac resin excreted by the lac insect. It’s very expensive. In the early 2000s I had a magazine ad featuring a silk rug in this vibrant colour—or rather the original version of it. The ad printed ‘hot’—the colour was intensified beyond the actual rug colour. After the magazine was published I got the torn out ad in the mail scribbled with notes and a Post-it note attached. Brad Pitt was the note writer and the Post-it was from Jennifer Aniston. ‘Hey Brad, take a look at this carpet!’ she wrote. I called Brad’s assistant and explained the rug was not the intense pink in the ad, but I was going to Nepal and could try and make a dye the same shade as the ad. I knew in theory I could do it. We worked and worked on the recipe. Magic happened on the third day and we had Brad Pitt Pink! His carpet was a solid pink with many sub-colours and overtones. The paintings in the Mark Rothko Chapel are a good analogy of the colour effect. At first look Rothko’s paintings appear as ‘single’ colours, but really they’re intense tonal vibrational colours with depth and soul, just like Brad’s rug.

A lot of machinery has been introduced into the natural dye process since I started my company in 1998, but I’ve stripped it back old school. We do everything by hand. We stir dye with sticks, we use “primitive” equipment and a lot of people and hands are involved. We work in small pots and small dye batches. There’s a lot of commercial pressure to give this up and I could “cheat” and automate for a higher profit margin, but I’m driven by something innate and deep within me; you’ve got to love the process and I do. Like Ayurveda where a natural holistic system is the goal, my rugs always involve compassion and love. I’m like a salmon swimming upstream, you follow your nature, and my nature is to create from love with love.