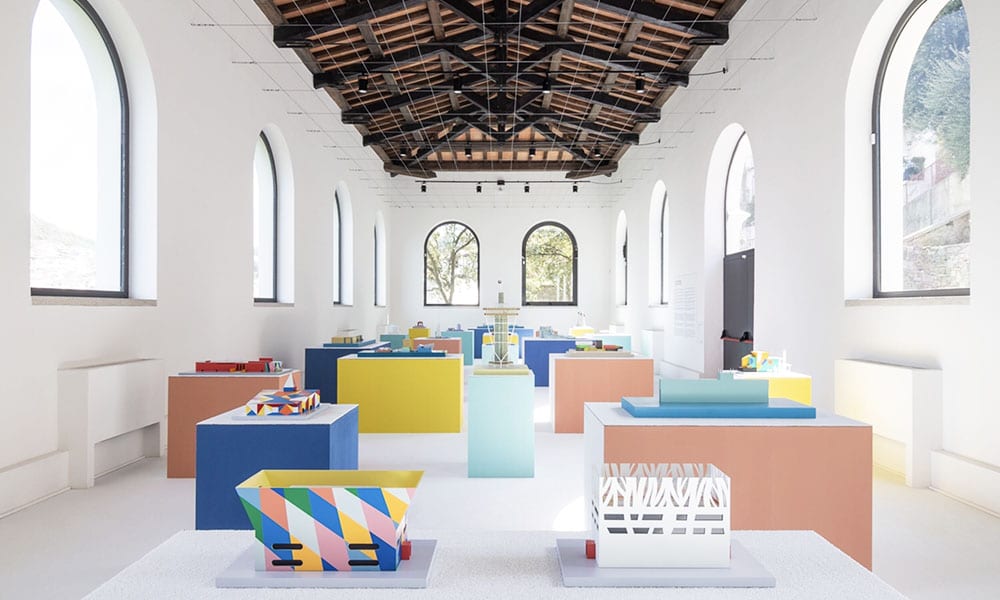 The role of objects is to ‘tell a tale’ said Alessandro Mendini. One of Italy’s most celebrated ‘grandi maestri’, Mendini died in February 2019 at the age of 87. His international renown was as a master of multiple disciplines—architecture, design, publishing—with intellect and curiosity. His legacy and life are appreciated through three rugs and his Proust armchair, objects that tell the tales of Mendini’s life, influences, and styles.

Drawing was core to Mendini. Disney captivated him as a youth, and the storytelling style of cartoonist Saul Steinberg is evident in Mendini’s sketches. The painting gallery in his childhood home designed by Piero Portaluppi was a recurring memory. Mendini’s Sunday Writings (2016) includes his 2006 self-portrait as a newborn in 1931. Lying next to his twin in a Portaluppi upholstered armchair (which doubtless inspired his Proust armchair), the swaddled infant Mendini stretches his arms towards the angel Gabriel in Alberto Savinio’s Annunciation painting from the family home. Described by Mendini as ‘mediterranean surrealism,’ Savinio’s paintings subtly influenced many Mendini designs.

Mendini often orchestrated his limitless ideas through iterations of a single idea or form. His Proust armchair—designed for Studio Alchimia in 1978—has been produced over the decades in multiple patterns, materials (wood, plastic, bronze, marble, ceramic), colours, sizes and surface treatments. Its heavily carved Rococo bergère-style frame symbolises the bourgeois lifestyle against which Studio Alchimia tilted. Mendini tamed the frame by merging surface with upholstery, similar to how his contemporary—English painter Howard Hodgkin—painted from the canvas onto the frame. The chair immortalises memories and Mendini’s idea that objects can be ‘read’ via its reference to Marcel Proust’s novel A la recherche du Temps perdu. Mendini told La Repubblica in 2016 the book is’ …a network of sequences without beginning or end. It mirrors the path of my life’. Mendini remained faithful to his Proustian muse from its “birth” until his death.

Mendini believed designers shouldn’t keep inventing new objects when existing objects could be the canvas for exploration. The rug as blank canvas allowed Mendini to do so. Milky Way designed in 2008 for Moret Carpets, Italy, hand-knotted in Nepal, is a reworking of his earlier ‘cosmological sketch’. The design incorporates his theme of voluntary and involuntary memories.

Words are woven in French (homage to Proust) rather than Italian. The rug reads like a spontaneous napkin sketch. The arc of the earth peeps over a long edge. Twisting paths, ersatz buildings, totems, figures, faces, and words crowd earth and expand into the sky to jostle stars, planets, and aliens. Two women point to a naked man who is a version of Mendini’s Burning Body. Meaning is layered, and as with Proust, some will be able to delve deeper meaning, while others will simply enjoy the cartoonish pattern.

Mendini was a key member of theoretical, experimental and radical ‘anti-design’ group Studio Alchimia, from which architect Ettore Sottsass defected in 1980 to found the design group Memphis. Mendini stayed with Studio Alchimia, but designed for the inaugural Memphis collection. In 2004 Mendini designed five editioned rugs hand-knotted rugs in Nepal for Memphis Milano’s Life’s Commodities collection. The geometric designs are jaunty. Two designs hark to geometrics found in Savinio’s Achilles Dream painting(1929), while the other patterns are arranged like silk tissue papier collé.

Mendini’s 2016 limited edition Earthquake collection designed in collaboration with Joseph Carini Carpets, New York, features his fascination with playing cards. Hand-knotted in Nepal, the four rugs—Toto, Rasuwa, Dhading, Gorkha—are reprised designs in keeping with Mendini’s love of iteration. Blue-faced Gorkha was a plate design, while Toto began life as a vase. Each rug is a mirror image with top-to-bottom reverse reflections, but only one is symmetrical, the other three are chiral (asymmetrical) reflections. Mendini’s magical mix of parlour tricks, optical illusion, Alice in Wonderland and Savinio’s surrealism are yet another expression of Mendini’s tilted worlds where up is down, ends are beginnings and vice versa.

The Memphis Milano 2004 catalogue quoted Maurizio Barracano’s Filosofia del tappeto. ‘Carpets can be seen’ he wrote, ‘as the passage between our very complicated existence and other worlds.’ If this is so, it comforts our farewell to Alessandro Mendini to imagine he is neither up nor down or at an end or a beginning, but is instead in one of his wonderful worlds. In our world, Mendini is and always will be the grandest of the grandi maestri. 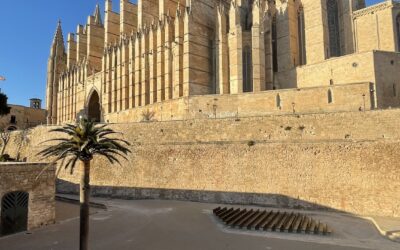