Frida Kahlo: Making Her Self Up

Clothing and intimate objects belonging to Frida Kahlo—one of the world's most recognised and significant artists—were sealed for fifty years in trunks and hidden storage spaces in Casa Azul (now Museo Frida Kahlo), her childhood home in a leafy suburb of Mexico City. In this exclusive review for COVER, Denna Jones explores objects from this stash on view in the V&A exhibition 'Frida Kahlo: Making Her Self Up'. 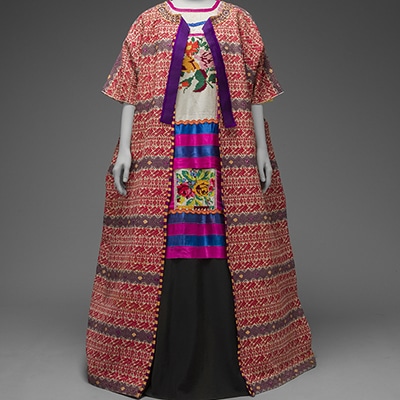 ‘Frida Kahlo: Making Her Self Up’ at London’s V&A museum until 4 November 2018 paints an intimate portrait of the celebrated Mexican artist, highlighting the way she employed indigenous costume and textiles both to celebrate her cultural heritage and disguise her physical suffering. Denna Jones introduces the current exhibition. 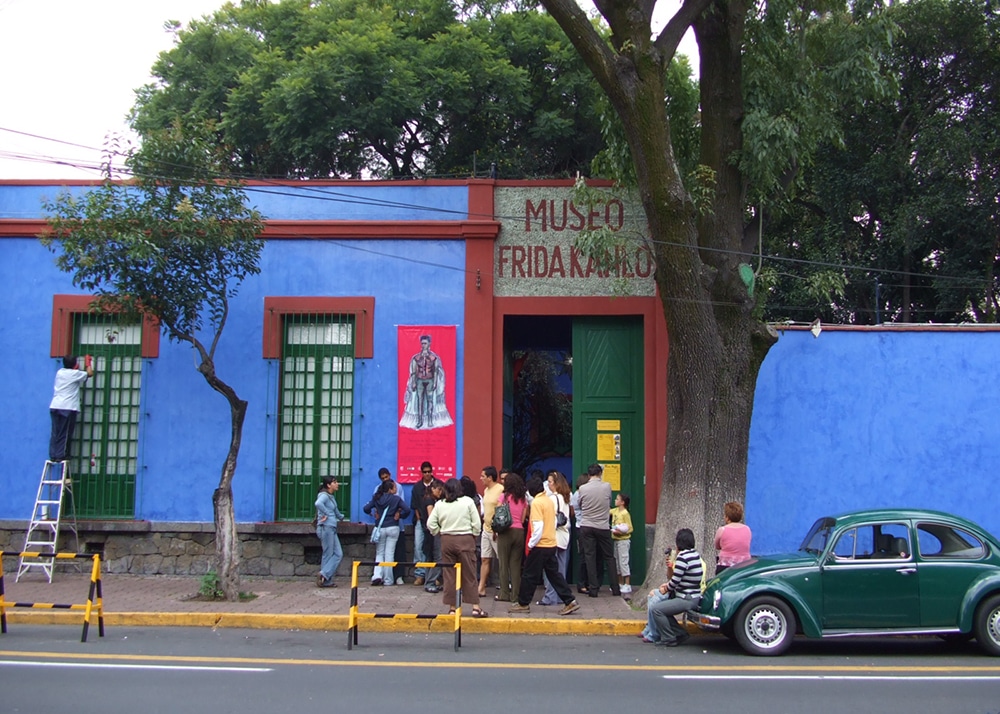 Clothing and intimate objects belonging to Frida Kahlo—one of the world’s most recognised and significant artists—were sealed for fifty years in trunks and hidden storage spaces in Casa Azul (now Museo Frida Kahlo), her childhood home in a leafy suburb of Mexico City. Never-before-seen outside Mexico, objects from this stash are on view at the V&A exhibition ‘Frida Kahlo: Making Her Self Up’ until 4 November 2018. Collectively the objects paint a portrait of how Kahlo used her body literally through her dress and make-up as both performance and homage to indigenous Mexican cultures, and figuratively through her art, as a public declaration of her pain, persona, politics, and experiences.

Kahlo’s identity as ‘mestizo’ (mixed race) shaped her life and art and doubtlessly fuelled her attraction to multiple dualities and carefully curated and changeable physical identities. Evidence of these dualities—including bisexuality—are seeded throughout the exhibition. Daughter of a German immigrant father and a Spanish-Mexican mother, Kahlo’s exuberant and unique artistic and avant-garde mode of dress included incorporation of the native dress of indigenous cultures of Central America—particularly from her mother’s Oaxacan Tejuantepec culture. Kahlo adopted embroidered huipiles with long skirts renowned as the costume of strong, independent Tejuanas, and the resplandor—a ceremonial Tejuantepec face-framing lace headdress—augmented with whatever tropes of western dress and make-up she felt enhanced her singular style.

Kahlo defied convention and expectations in multiple ways. The exhibition includes an elaborately embroidered red leather prosthetic boot to accommodate her below-the-knee amputation of one leg in 1953. The duality of amputation in tandem with her ‘complete’ leg was amplified by Kahlo with tiny sleigh bells attached to the laces of the prosthesis to ‘announce’ her arrival in a room. Rather than tweezing her eyebrows into separate elements, she used Revlon’s ‘Ebony’ eyebrow pencil—on display along with her ‘Raven Red’ nail varnish and ‘Everything’s Rosy’ lipstick—to enhance her declarative monobrow. 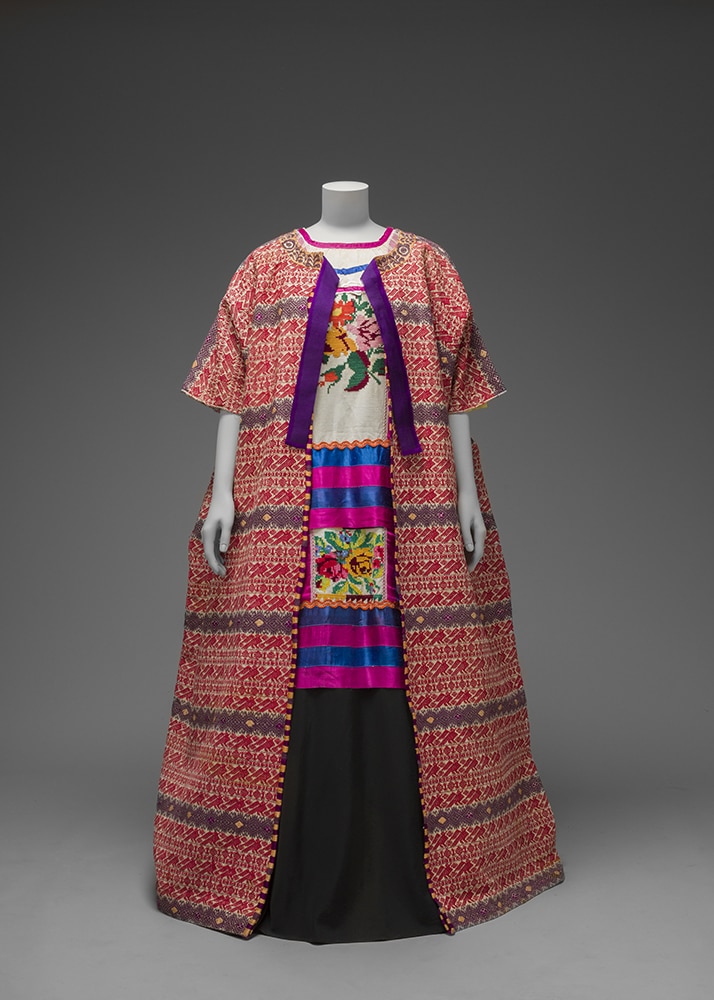 Display cases in one of the exhibition’s main rooms are full-scale adaptations of her four-poster tester bed from Casa Azul. Objects including jewellery, cosmetics, photographs and medical objects are arrayed on the ‘beds’. The life-altering consequences of her streetcar accident aged 18 meant she endured multiple surgeries. Prolonged post-op recuperations dogged her life turning her single bed into her studio and staging post for self-expression. The bed’s elevated ‘tester’—a flat panel horizontal to the mattress supported by the four posts—provided the space for Kahlo to affix a mirror to reflect her body. She used this set-up to paint self-portraits on canvas, but also to paint the surfaces of the medical corsets that imprisoned her fractured body for most of her life, several of which are in the exhibition. 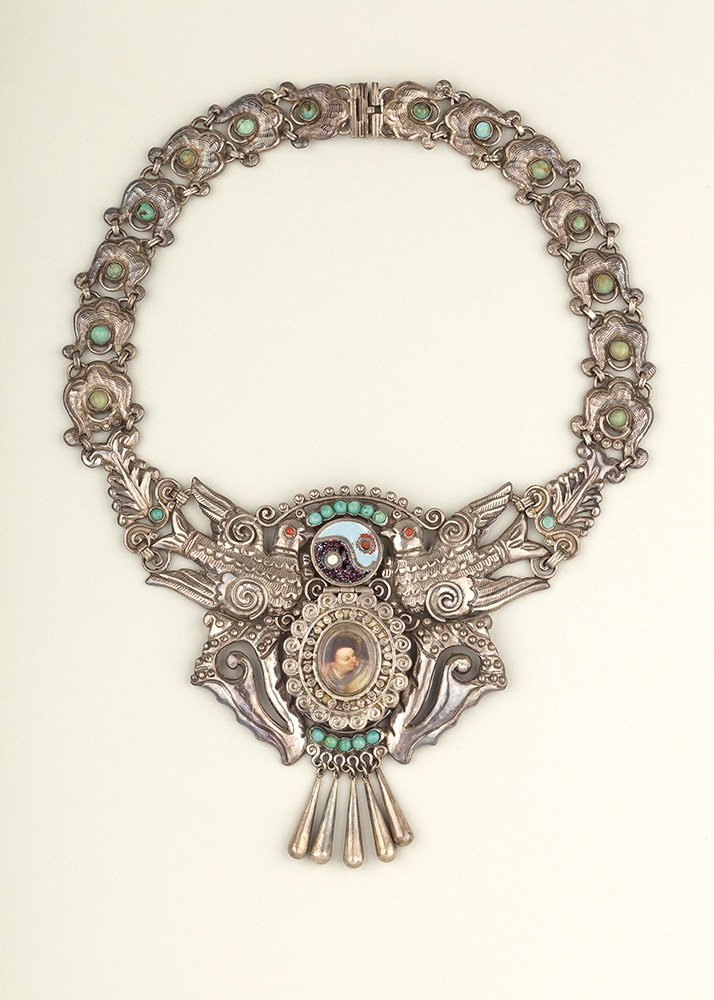 Kahlo’s international recognition as a blue-chip artist and cultural touchstone is undeniable. The public’s desire to identify with her story and art is insatiable. Evidence of her cultural currency is everywhere. Kid-cool cult skate company RipNDip appropriated Kahlo’s Self Portrait With Monkeys and replaced her monkeys with their white cat mascot Lord Nermal on products from backpacks to Converse sneakers. Before she died in 1954, Kahlo wrote that she hoped ‘never to return’ to this world. What she didn’t realise is that the eternal cult of Kahlo means she never really left.

Frida Kahlo: Making Her Self Up, Victoria & Albert Museum, London, until 4 November 2018.