Between 18-22 January this year’s Paris Deco Off took place in over a hundred textile and rug showrooms throughout the city, the dates almost exactly overlapping with Maison et Objet. 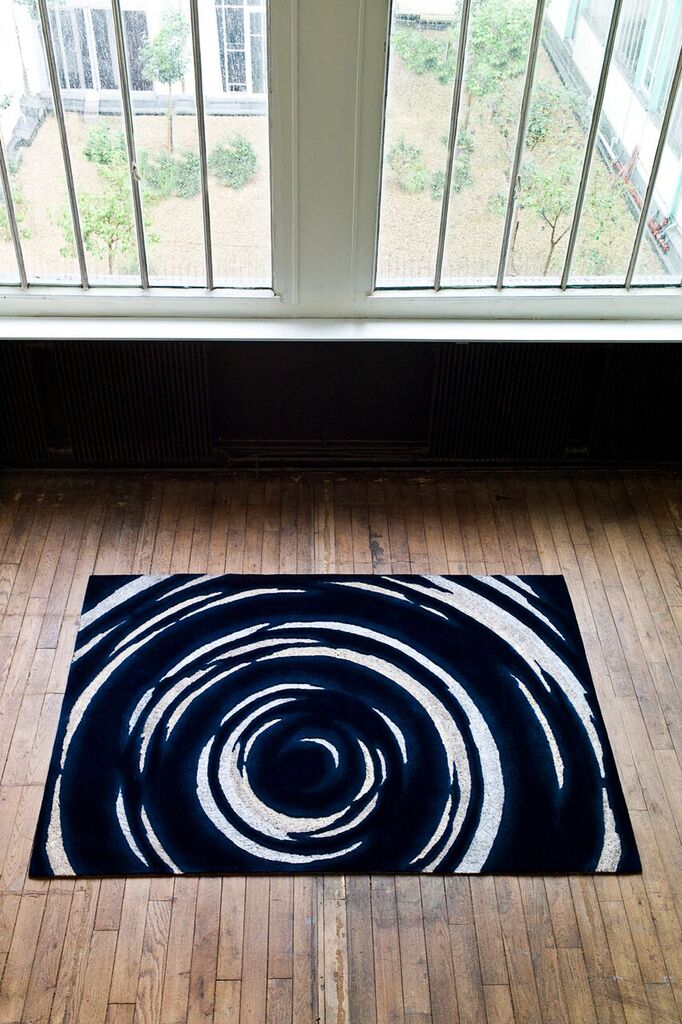 Between 18-22 January this year’s Paris Deco Off took place in over a hundred textile and rug showrooms throughout the city, the dates almost exactly overlapping with Maison et Objet. But while the enormous furniture and accessory show outside of Paris may be the Big Event, Deco Off held its own with an impressive number of new lines on view. It makes an excellent compliment to the larger show, and even if you had only made it to Deco Off, you’d have come away feeling inspired and energised.

Despite the bleak skies and heavy intermittent rain, the showrooms hummed with energy as visitors braved the weather and the occasional crowds to glimpse what was on offer for 2018.

Here are a few highlights: 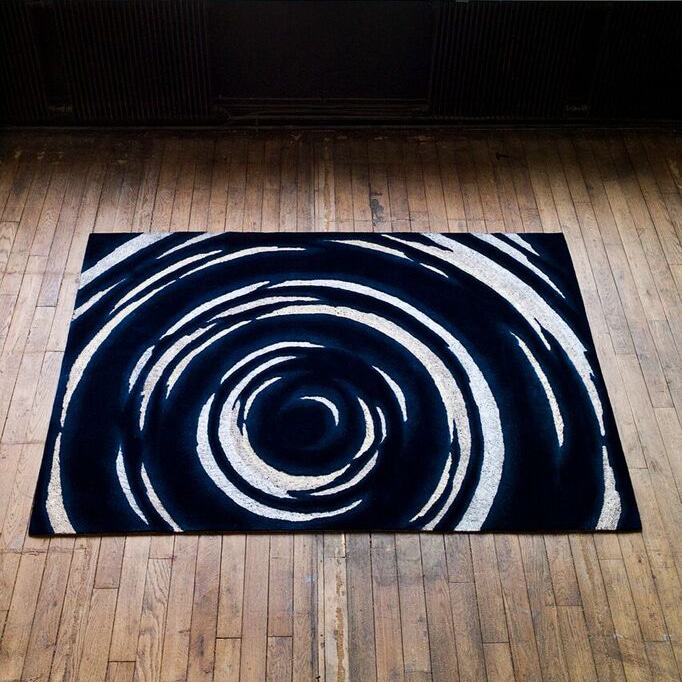 Ateliers Pinton launched a new water-inspired collection by designer and long-time collaborator, Ulrika Liljedahl. These hand-tufted rugs are distinguished for their novel use of materials and their iridescent, mesmeric qualities. The collection features, among others, Encyclie in cotton and phosphorescent thread, and Octocorallia, an ode to undersea coral, in cotton, tulle yarns (polyamide) and hammered metal. (Images include: Encyclie and Octocorallia) 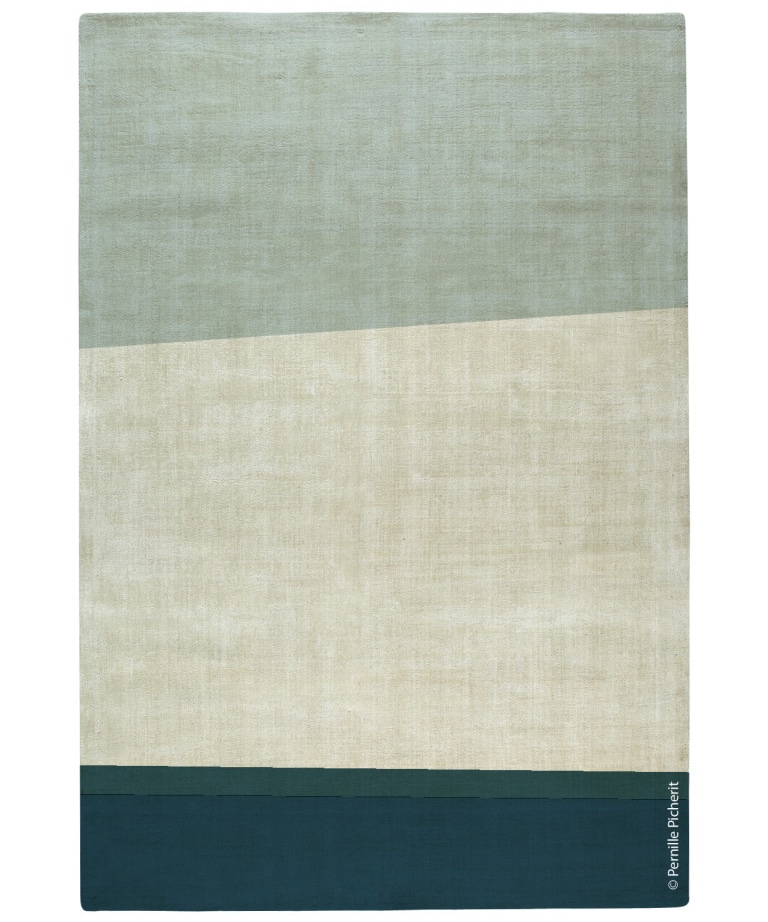 In quite another vein of feeling, Codimat showed new rugs by Danish designer Pernille Picherit. The hand-knotted collection was somber and elegant, with a distinctly Scandinavian reserve. (Images include: At the Sea and The Exit) 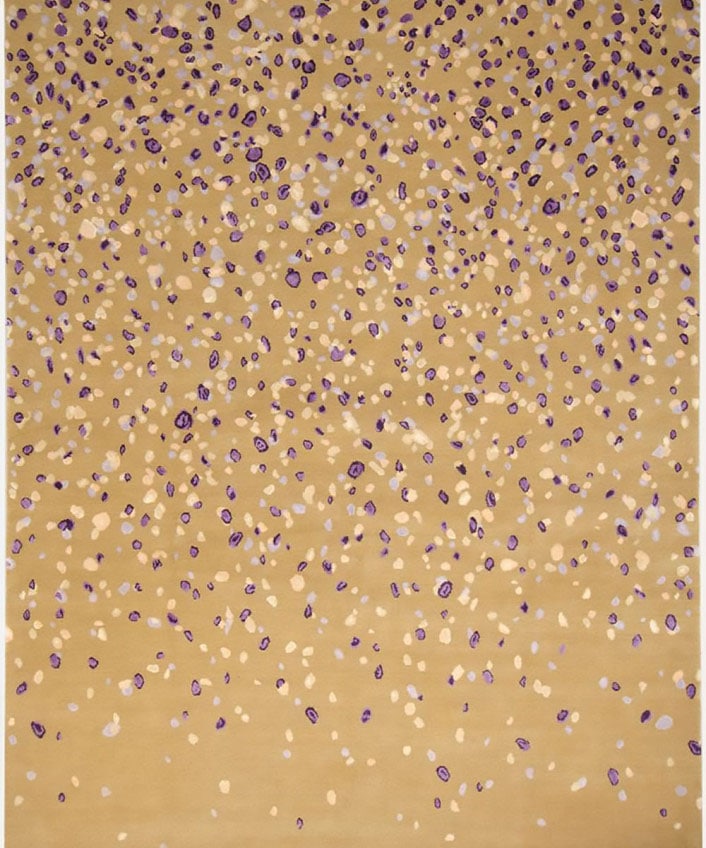 In addition to the “rug paintings” of their prolific founder, Marcel Zelmanovitch, shown in one showroom, across the street Diurne displayed a new collection by Marie Bastide inspired by primitive mythology. Abstract and often painterly, these designs are also available fabricated as tapestries, some of which were also on view. The rugs use a mix of Tibetan and New Zealand wool and about 25% silk blended into the design. (Images include: Calypso, Dryades, Eos tapestry, Tupa, Uranie and Yoku) 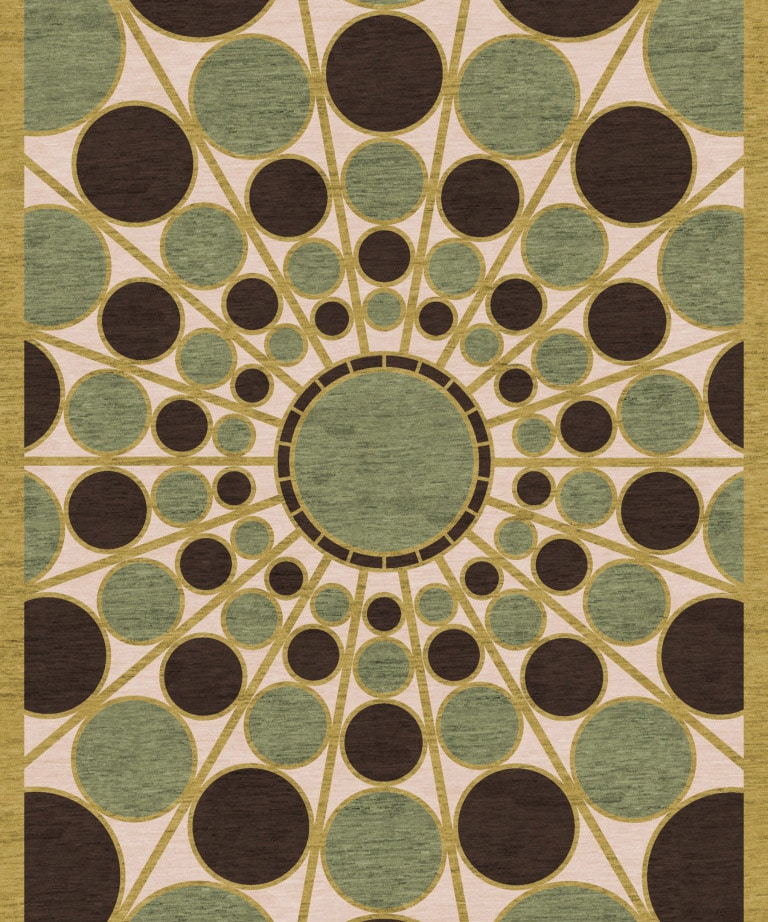 Galerie Chevalier, fourth generation purveyors of antique rugs and tapestries, were presenting new rugs in their Parsua Collection. The only rug makers in the show working exclusively in Iran and using only natural dyes, they showed several dramatic new designs by Nicolas Aubagnac, including Byzance, a pleasing rug with an art-deco sensibility, and Saturne, which glowed like the planet it represents. (Images included: Byzance, Saturne) 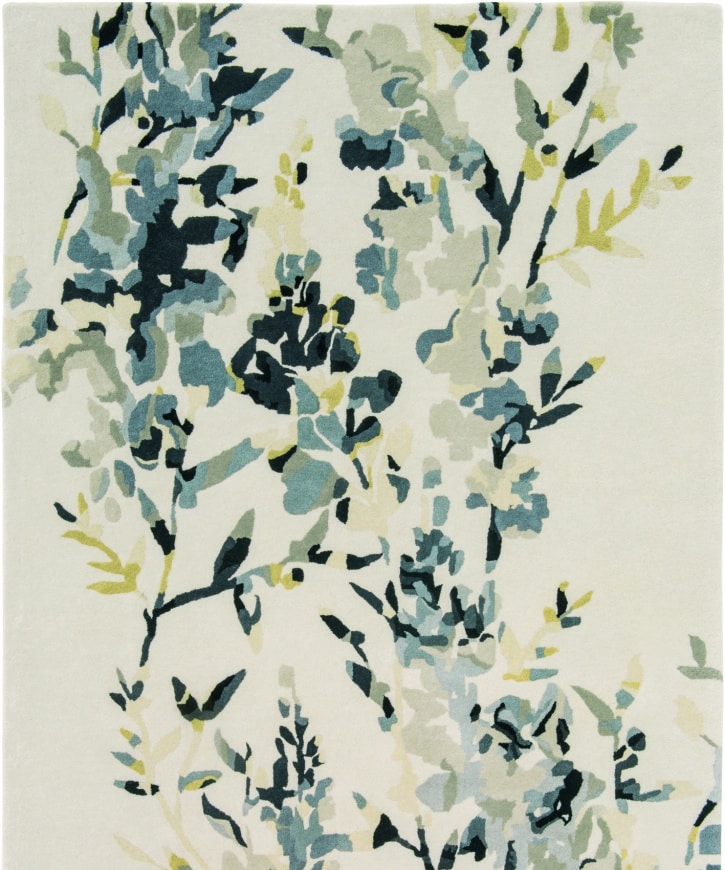 Making an entry into the world of rugs this year, Villa Nova and its parent company, Romo, have enlisted the talents of Louis de Poortere to create two lines of flat weave and hand-tufted rugs to compliment their already extensive collections of wallpapers and textiles. Among them, were the cheery Clarice (available in two colour ways) and charming Hana (available in three). (Images include: Hana (carbon) and Clarice (multi).

Among the many wonderful textile and wall covering showrooms, a few stood out for particular innovations or design. 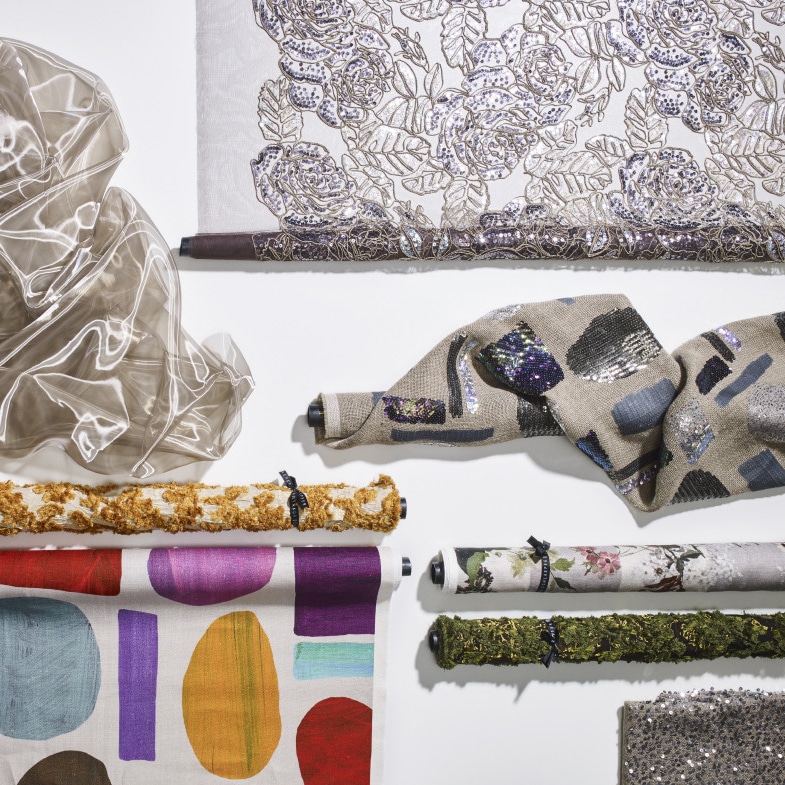 This 100 year-old textile house has been known to take full advantage of technological developments to enhance their offerings. Their latest collection of 8 wallpaper designs is no exception. Using layered computer images and large-scale graphic singular or repeat patterns, the designs are bold and tactile, taking inspiration from several historical styles, including Art Deco, Japanese lacquer and English gardens, and some even include shiny hologram foils. (Images include: Fabric samples for 2018 showing interesting techniques, Poppy Byobu, Poppy Lloyd and Poppy Audley) 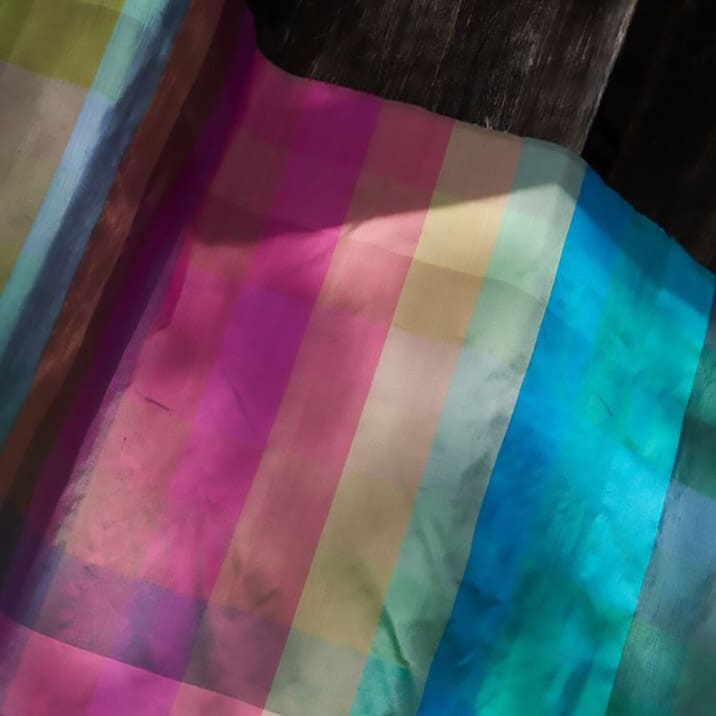 Jim Thompson was started by the eponymous founder, who began importing Thai silk to the West in the 40’s and disappeared mysteriously from Malaysia in 1967. Handwoven silk is at the core of their many lines of fabrics, wall covering and clothing so it was exciting to see the launch of a completely new range of colours, called Every Colour Under the Sun. Among the designs spun of this beautiful material, and to scratch the itch of Chinoiserie lovers everywhere, was Bardo in a range of striking colour ways.

Also, noteworthy was a new collection by Geert Voorjans, including Ondine, a tribute to fauvist painting. 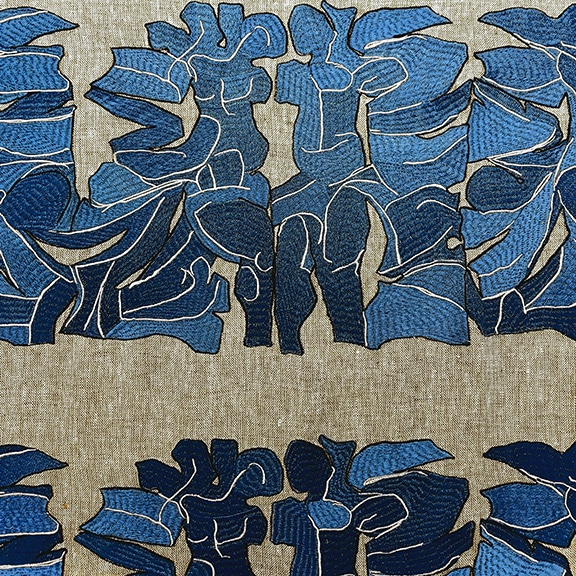 At her small, chic shop in Saint Germain, I had the pleasure of hearing Karin Sajo talk about her Hungarian artist father’s life and work and how it influences her own approach to textile design. In interpreting his oil paintings and prints, her colours and patterns are bright, direct and refreshing. One specially compelling new design was, Icare (Icarus), adapted from a painting, with bold bands of coloured forms embroidered on linen. It comes in several strong colour ways. (Images include:, 2X Icarus (Agean Sea), Maelstrom (Salmon), Karin showing Maelstrom, storefront with Icarus (Scorched Earth)) 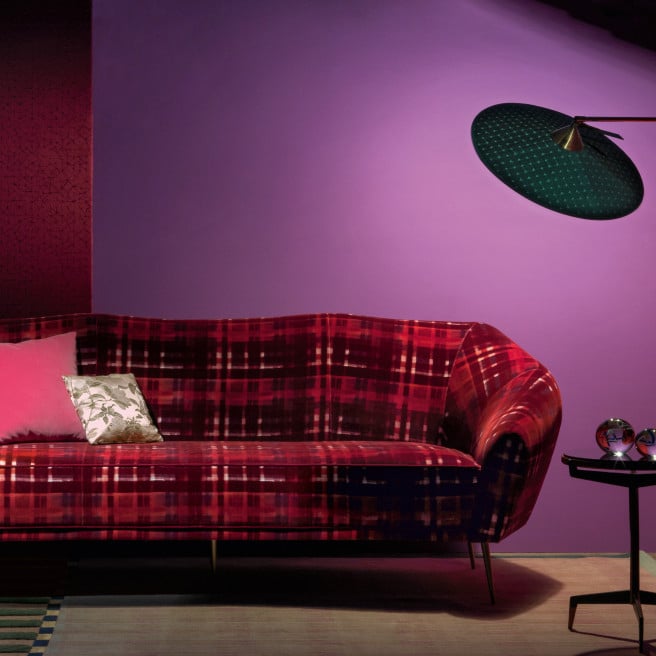 The Rubelli showroom was abuzz, and with good reason. There was much to look, touch and sit in and many of their new designs stood out for their colour, construction and moxie. Not least was a handmade chair called Pila, which was as elegant as it was quirky; push the side down and sit on a surprisingly comfortable chair, lift it up again and behold a work of textile art in your living room.

Their new textile patterns grabbed attention in various settings, including MacAllan, a pleasingly fuzzy plaid printed on velvet, seen on a sofa and on a wall, and Goldfinger, a patinaed floral design of printed and embossed vinyl on a heavy base that looks like raw silk and was shown as a wall covering, fabric and even a lampshade. (Images include: Pile-45 chair — several options, open and pushed down —, MacAllan blue sofa, MacAllan red sofa, macallan/goldfinger ottoman) 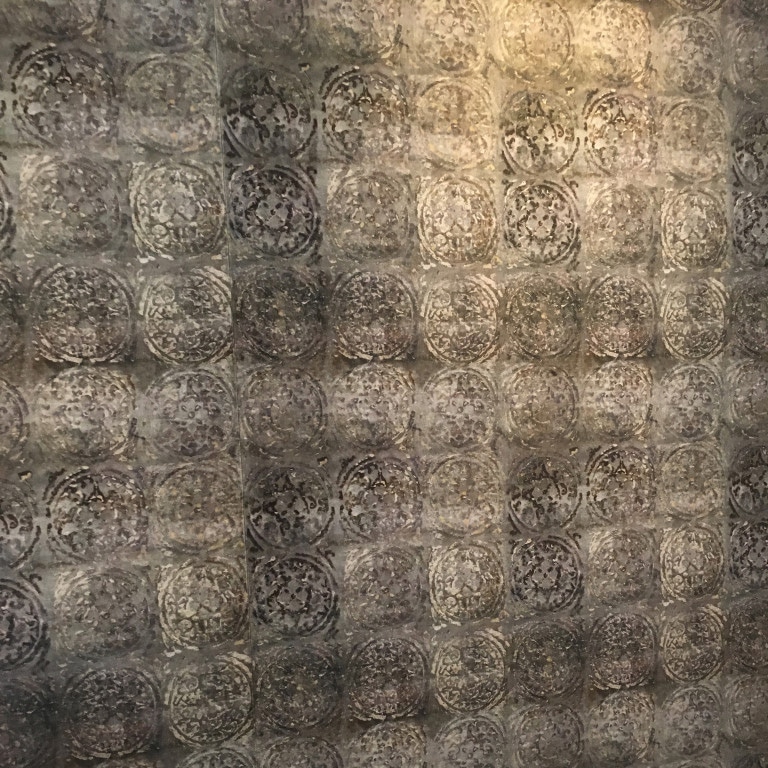 The friendly crew at Alhambra welcomed me in from the rain and were happy to chat about their new designs for 2018. One that caught my eye was inspired by ancient coins. I’d at first thought it was relief carving on an ancient building surface, but either way the complexity and mottled depth suggest antiquity in appealing form. One wall was covered by Japanese Garden, a multi-layered abstracted floral pattern of silvers, blacks and gold tones, which was riveting in its painterly richness. These will be available in the early spring. (Images included: 3X the coin-inspired design, Alhambra logo over the second wall covering mentioned.)